“And seeing the man who had been healed standing with them, they could say nothing against it.” Acts 4:13-14 NKJV 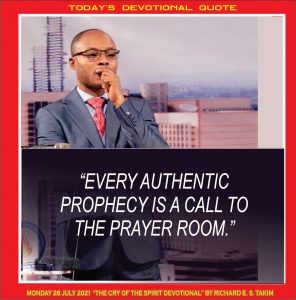 WELCOME TO THE 207TH DAY OF OUR YEAR OF HIGHER HEIGHTS!

Glory be to God for His marvelous deeds in our lives and glorious acts. He has been faithful and very mindful of us. I believe this week shall be for you a week of results and answers following all we have seen and heard from the LORD in the week that just ended.

For us at the Cry of the Spirit Ministries, we have decided to make this week a week of reflecting on all the LORD taught us in the season tow of our special school of the Spirit, Seven Days Seven Mountains (7D7Mnts).

As always, God has a word for us today.

To start with, I want to Ask; Have you ever received a prophecy directly from the Spirit of God to your spirit or through a true man or woman of God that never came to pass? I have!

I guess many others have also. Anyone who says failed prophecies do not trouble them is a liar; especially when they speak concerning our deliverance from some yokes, expected blessings or some major things God want to use us to do.

We are all troubled when genuine prophecies concerning us seems to have either failed or are delayed! Mark the word “genuine” because I am not referring to false prophecies, or the things we just pick from realms that look God but are not God and say “God say.”

Neither am I referring to the things some prophets and pastors prophesy upon people to look anointed, or things expressed because of some fat offerings received. You know, when you give some good money to money controlled prophets and preachers it could stir out a prophecy.

Now, I am not referring to these man made prophecies. I am referring to genuine word of promise from the LORD that came to you either directly or indirectly.

God wants every word of deliverance, blessings, lifting or visitation He sends directly or indirectly to us to be fulfilled. If He never wanted His words to be fulfilled, He will not send them.

GOD IS NOT A TALKATIVE. HE SAYS WHAT HE MEANS, AND MEANS WHAT HE SAYS.

That was why when Zachariah doubted the word He sent through Gabriel in Luke Chapter 1, his mouth had to be shut to prevent further things He may say from hindering the word of the LORD from coming to pass.

Some of those obstacles are doubt and lack of Confidence in what He has said.

In second Kings Chapter 7, a special adviser to the King of Israel on economic matters made a confession of doubt after a word from the LORD was spoken. And Elisha said to him,

“In fact, you shall see it with your eyes, but you shall not eat of it.”

The wrong time to make a confession of doubt is when a word has proceeded from the LORD to you, and the wrong place to do it is before a genuine vessel God may be using to transmit such words to you.

When God speak He speaks from opened portals of Heaven. It is those portals that release the power to perform what He says. They make it possible for the word to come with an inherent performing power. That is why Isaiah wrote saying;

“For as the rain comes down, and the snow from heaven, and do not return there, But water the earth, and make it bring forth and bud, that it may give seed to the sower and bread to the eater,

So shall My word be that goes forth from My mouth; It shall not return to Me void, But it shall accomplish what I please, and it shall prosper in the thing for which I sent it. Isaiah 55:10-11 NKJV

THE WORD OF THE LORD WILL NEVER RETURN TO HIM VOID; IN OTHER WORDS, IT WILL NOT LACK THE POWER TO PERFORM ITSELF IN THE LIVES OF PEOPLE.

Any confession you make therefore, at that place and time is being made under an opened portal. A confession of doubt will shut the portal over your private life and prevent the word from coming to pass.

Sometimes confessions of doubt are not made verbally. They are made in the thought realm. Some paradigms that prevent a genuine word from God from coming to pass will just react within us at the time of hearing that word. That was what happened to Zachariah and the economic adviser to the King of Israel. It’s just that they voiced it out. But there are those who do not voice their thoughts out.

Before Jesus left, He had told these men that signs shall follow them. That in His name they will heal the sick, raise the dead, cleans the lepers and bring timely interventions to many. That was a prophecy. But it never came to pass in a large scale until they spent time with Jesus.

Spending time with Jesus turned these men who were un-educated and untrained in matters of religion into super men; it turned them into miracle workers as the LORD had said.

That gives us one major key to use in turning prophecies into manifestations. And that key is BEING WITH JESUS! Hallelujah! In other words, being a man or women who spends his or her days on the prayer knee!

EVERY AUTHENTIC PROPHECY IS A CALL TO THE PRAYER ROOM.

Waiting upon the LORD is not being in a state of inactivity as it sounds, but being on the prayer knee until the word of the LORD come to pass in your life. The only person to be with after God may have spoken to you is Jesus, not any servant of GOD.

Sadly, most of us run after the vessels to be with them instead of Jesus, consequently defeating the word of the LORD in our lives. You could start drinking from the fountain of the vessel God may have used to speak to you if he or she has a ministry, but the only one you truly need to run after and be with until the word comes to pass is Jesus Himself.

And if we take our eyes of us and fix them on God’s redemptive plans for mankind, you will realize that many prophecies about major moves of God on earth have not being fulfilled because there are no people to lock themselves up in prayer until the come to pass.

I once read a book that said, before men and women like Katherine Khulman, Charles Finney, Maria Woodworth Etta and the likes sprang up, people locked themselves up in chain prayers and prayed some scriptural prophecies into performance.

And permit me to add that the kind of prayers you pray to move prophecies from the realm of promise to the realm of performance is not the one you pray with prayer books but with the prayer spirit. Deep must call unto deep. The burden of seeing that word come to pass must be the reason behind the prayers. That is the only way you can stay strong and long enough on your prayer knees.

I believe the message of today’s devotional has been passed. Be the doer of this word and not just a reader and your life will not remain the same.

“Now it shall come to pass, if you diligently obey the voice of the Lord your God, to observe carefully all His commandments which I command you today, that the Lord your God will set you high above all nations of the earth.

“The Lord will command the blessing on you in your storehouses and in all to which you set your hand, and He will bless you in the land which the Lord your God is giving you.

“The Lord will establish you as a holy people to Himself, just as He has sworn to you, if you keep the commandments of the Lord your God and walk in His ways.

Then all peoples of the earth shall see that you are called by the name of the Lord, and they shall be afraid of you.

And the Lord will grant you plenty of goods, in the fruit of your body, in the increase of your livestock, and in the produce of your ground, in the land of which the Lord swore to your fathers to give you.

The Lord will open to you His good treasure, the heavens, to give the rain to your land in its season, and to bless all the work of your hand. You shall lend to many nations, but you shall not borrow.

And the Lord will make you the head and not the tail; you shall be above only, and not be beneath, if you heed the commandments of the Lord your God, which I command you today, and are careful to observe them. Deuteronomy 28:1-13 NKJV