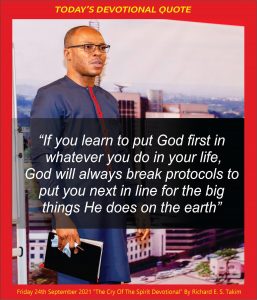 WELCOME TO THE 268TH DAY OF OUR YEAR OF HIGHER HEIGHTS!

Count down to the last seven days of this month begins today. We have seen so much of God’s blessings in our lives; we owe Him so much thanks for His great mercies shown towards us. He is the God of Israel who have been steadfast in keeping us all through the minutes and seconds of this month. We owe Him all glory and honor. Above all, we owe Him worship.

Seven, we all know is the number of God. It is a number that calls for perfection. It also calls for maturity and completion. It calls for putting God first in everything we do.

If you have not put God first in your life in the last nine months of this year, this is another chance from God for you to put Him first in all you may do or may be doing in the rest of the year. Maybe that is why you have not seen big things this year.

I have come to discover that if we put GOD first in everything we may be doing, He will put us next in whatever good He intends to do among men. Do not forget, the Psalmist says;

“For the Lord God is a sun and shield; The Lord will give grace and glory; No good thing will He withhold from those who walk uprightly.” Psalms 84:11 NKJV

GOD DID NOT CREATE US TO HAVE ANYTHING COME BEFORE HIM.

That was why the first lesson He taught His first-born Nation, the nation of Israel, when they got to Mount Sinai to receive the Constitution for running their lives says;

“I am the Lord your God, who brought you out of the land of Egypt, out of the house of bondage. “You shall have no other gods before Me.

God never created anything to come before Him. That is why if you check the evil that mankind is going through, you will discover that all our sorrows steam from putting other things in life before God.

Mankind was not originally designed to put anything before God, so each time we do it, we malfunction and most times kill something precious in our lives.

I have seen so many lives destroyed trying to put themselves first before GOD. Putting yourself or other things before GOD in your life is called Idolatry. Idolatry attracts so many curses from God and even the devils who promotes it. They promote it to destroy us.

You must understand that each time man tries to put himself or other things before God in his way of life, he malfunctions. Each time we malfunction, we begin to function outside our design and start paying dearly for it. It will always be like trying to make a fish swim in a very hot sand instead of the water it was designed to swim in.

WHENEVER WE TRY TO FUNCTION OUTSIDE THE DESIGN OF PUTTING GOD FIRST, WE SUFFER.

Anything we put before God will suddenly be destroyed because nothing was originally created to come before God. Not even a ministry.

God never wanted the nation of Israel to self-destruct the way other nations of the earth were. Hence, as soon as they came out of Egypt, He quickly took them to Mount Sinai to give them the very important lesson of putting Him first in life, as written in the Holy Scriptures.

If we put God first in everything we may be doing, He will put us next. But if we put ourselves first, we will not see Him putting us next like He did Esther after Vashti was removed. Remember, there were many women.

Friend, the easiest way to self-destruct either in time or eternity is to put yourself before God. The rule remains “We must have no other gods before HIM.” The death of Jesus on the Cross did not change that. It rather established it.

Concealed in it is a strong message resounding what God told the nation of Israel at the foot of Mount Sinai as stated in the scripture above. We must always learn to out God first.

Sometimes we blame so many things that deliverance inventors create as the treason for loosing blessings.

BUT MOST BLESSING ARE LOST WHEN WE BEGIN TO PUT THE BLESSINGS FIRST INSTEAD OF THE BLESSER.

Jesus came to restore is back to a relationship of putting God first. He showed us how when He said, “I can of my own self-do nothing. As I hear so I speak.” Today by the power of the Holy Spirit and the His Holy Word, the Bible, we can return to a life of putting God first. One of the most significant set of scriptures in the Bible says;

“But seek first the kingdom of God and His righteousness, and all these things shall be added to you.

Therefore do not worry about tomorrow, for tomorrow will worry about its own things. Sufficient for the day is its own trouble.” Matthew 6:33-34 NKJV

What can we glean form this truth? So much!

You see, putting self-first led to the loss of our Original place in God, putting GOD first will get us back to that position. It will not just get us back; it will shield us from the sufficient trouble in a day, week, month, or year. That is why I consider putting God first as the greatest insurance cover against the perils of this life.

Not allowing anything to come before God in your life will make sure that whatever comes against you is defeated before you. David said;

“I will rejoice in You and be in high spirits; I will sing praise to Your name, O Most High! When my enemies turned back, they stumbled and perished before You.” Psalms 9:2-3 AMP

David was a man who knew How to put God first in his life. That was why he saw God taking care of his enemies. When we put God before anything in our lives, our enemies will always fall before GOD, hence always falling before us. Hallelujah!

THE QUESTION NOW IS, HOW DO WE PUT GOD FIRST?

The first way to put God first in our lives is by genuinely surrendering our lives to Him for divine leading, instruction, correction, guidance, direction and etc. It is by walking in obedience and submission, doing His blessed will and none of our will.

We put GOD first in time of crisis by running to Him first instead of calling on people. We do it by not relying on the arm of flesh when trouble comes. People who rely on the arm of flesh in the day of trouble will only end up suspending their victories or cancelling it altogether.

To put God first even in time of peace, we must remain strong in faith, looking unto Him as author and finisher of our faith in any situation we find ourselves.

David displayed all these in his 70 years on earth. He would not do anything without putting God first. He will seek His direction or counsel before taking decisions. Excerpt for the sin of Bathsheba, David in his dispensation would have had a perfect life for putting God first.

He would pray to Him five times in a day according to scriptures.

He would call for help even when he had all it takes to deal with the enemy. David put God first by totally depending on Him for anything and everything. In fact, he was so dependent on God that he never even trusted his bow, arrow, chariot or horses in the day of trouble.

One day he said;

“Some trust in chariots, and some in horses; But we will remember the name of the Lord our God. They have bowed down and fallen; But we have risen and stand upright. Save, Lord! May the King answer us when we call.” Psalms 20:7-9 NKJV

You can sense the kind of person David was from these beautiful scriptures.

This man put God first even before his fighting skills and weapons of war. That was why He saw God rising to save him in the many battles that he fought. You are the next on the list.

“What shall we say then? Is there unrighteousness with God? Certainly not!

If you want to see this scripture manifesting in your life the rest of this year, spend each day putting God first. You do not need to insure the rest of the year by giving some money to some preachers as seed for the reaming year. Just spend each day putting God first, and He will put you next for the mercies He has prepared to pour on the human race the remaining half of this year.

The principle remains, it is not of him that wills, or of him that runs, but of the LORD that shows mercy. May His mercies sort us out the remaining half of this year in Jesus precious name. Amen!

“I will love You, O LORD, my strength. The LORD is my rock and my fortress and my deliverer; My God, my strength, in whom I will trust; My shield and the horn of my salvation, my stronghold.

I will call upon the LORD, who is worthy to be praised; So shall I be saved from my enemies. The pangs of death surrounded me, And the floods of ungodliness made me afraid.

The sorrows of Sheol surrounded me; The snares of death confronted me. In my distress I called upon the LORD, And cried out to my God; He heard my voice from His temple, And my cry came before Him, even to His ears.” Psalm 18:1-6 NKJV