“So He humbled you, allowed you to hunger, and fed you with manna which you did not know nor did your fathers know, that He might make you know that man shall not live by bread alone; but man lives by every word that proceeds from the mouth of the Lord.”

“Your garments did not wear out on you, nor did your foot swell these forty years. You should know in your heart that as a man chastens his son, so the Lord your God chastens you.” Deuteronomy 8:3-5 NKJV 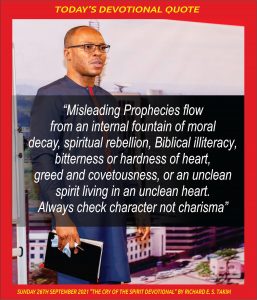 WELCOME TO THE 269TH DAY OF OUR YEAR OF HIGHER HEIGHTS!

The days of glory are indeed here. The days of the glory of the later house are here. The Bible says it shall be greater than the former.

When we say glory we are referring to the fullness of God on display. And Jesus is that fullness. He is the glory of the later house Himself, and is present among His people across the globe, demonstrating and manifesting His fullness.

Friend, like I have always maintained, these are no longer days of praying with bottles of oil in your hands. We have done that in time past and discovered that there is more in God. There so much to press into in our age that is bigger than the anointing Oil. It is called the fullness of God; which actually is the essence of the mystery of godliness.

Today shall be for us a day of God’s Rhema word; in other words, “God’s proceeding word.”

It is important to note that, that the Bible is made up of the logos and the Rhema; the spirits and the letters, the spoken and the written word.

What I mean is, when you read the word with the author by your side, He sets the revelation of the word on fire in your heart. He ignites it with the Spirit of prophecy, which is the testimony of Jesus Christ.

In God’s kingdom, genuine prophetic flow is scripturally based and scripturally grilled. God does not speak in contradiction to His written word. The Bible is full of amazing scriptures to wait and meditate upon to receive a proceeding word from the LORD on any situation in life.

Now I am not saying we stand on one single scripture then come out with a suppose proceeding word from the LORD.

THAT WILL BE HERETIC AND DESTRUCTIVE.

The Bible is not capable of private interpretation. In other words, every scripture is designed to be interpreted by another scripture. And such interpretations can only be accurate if the per son reading the Bible or preaching from it is filled with the Spirit of truth.

Sadly, many have stood on certain feelings and twisted scriptures to speak a suppose word from the LORD and destroyed themselves and those who heard them.

For instance, those who stood on the scripture that told us how Elisha poured salt into a stream and prophesied it out of its plague has told us how God used that scripture to speak to them to use salt to pray for people.

Heresies and false prophecies are conceived that way.

They are conceived when men and woman who have not sat under genuine apostolic grace to be circumcised at heart try to preach the Bible. They are conceived by inspirations that are not rooted in sound doctrine, and prophetic feelings not powered by the Spirit of Truth.

Sadly, the prophetic feelings of most people these days are scooped from carnality and Biblical Illiteracy. Most are believed because they are coming from the mouths of Ecclesiastical intimidators.

I saw a video where some people were trying to use a word of prophecy to explained why their bishop friend a live life of extra marital affairs. They said ten people in that Church brought the lifestyle to him. That was after one has said people pay women to come and sleep with the Bishops so that the ministries of the Bishops will fail; an effort to deal with sin the wrong way.

ONLY THE BLIND AND BIAS CAN’T SEE. YOU NOW ASK YOURSELF, WHO IS FOOLING WHO?

If you do not have the Spirit of Christ in you, and if you do not understand the testimony of Jesus Christ, you will take all the games as a word from GOD. But if Christ is in you, you will understand that those so called revelations and words from God were all grilled by a desire to mitigate the impact of a man’s sin on his life and ministry.

If you watch those videos, you will realize that these people are not even interested in his repentance but his reputation. They did what Jesus, as the Lion of Judah and the owner of the Church, will never do. They did what Samuel will never do to Saul or Paul to any sexual immoralist in Church. The Bible says;

“Every word of God is pure; He is a shield to those who put their trust in Him. Do not add to His words, Lest He rebuke you, and you be found a liar.” Proverbs 30:5-6 NKJV

By the time God will be rebuking these guys, many will forget that they ever did this nonsense. They will be calling it spiritual attacks on their papas and mamas and leading people to pray for them. This scripture is a warning to the “GOD told me” and “GOD say” generation who lies on Him and say “He says” while He has not spoken a word.

YOU MUST UNDERSTAND A MYSTERY ABOUT MISLEADING PROPHECIES.

Misleading prophecies flow from, an internal fountain of spiritual corruption, moral decay, spiritual rebellion, scriptural ignorance, greed and covetousness bitterness or hardness of heart. This kind of corruption exits in the hearts of so many in God’s garment.

So many words from God are very untrue and misleading. That is why people who pursue such prophets and prophetesses instead of the more sure word of prophecy, the Bible, are being misled and lied to. Sadly, many want to hear prophecies instead of sitting down to be taught the word.

You find a lot of what looks like prophetic madness among some youths today, especially in the area of marriage. One will hear from God at one moment to marry this person, and at another moment they are hearing another thing; sometimes within the same week.

And in such moments I ask myself if God is confused and stupid that He does not know who is the real wife or husband of such people. But I know He is not. It is the people that are stupid and confused yet lying on Him.

If you are not pure a heart, you will never receive a pure word from the LORD. We must understand that to receive a true Rhema word from God, your spiritual fountain must be pure.

Our devotional text today is very unique. A major Highlight of it says;

“So He humbled you, allowed you to hunger, and fed you with manna which you did not know nor did your fathers know, that He might make you know that man shall not live by bread alone; but man lives by every word that proceeds from the mouth of the Lord.”

In this scripture, He made Israel to suffer hunger and fed them with just one type of food from Heaven. Apart from bringing them to a place in the Spirit where they can develop a sense of value on the proceeding word, the other intent was to purify them. God’s will, was to have them as a prophetic people on the face of the earth.

However, it was not possible without them being purified by the LORD.

IT IS THE SAME PROCESS HE USUALLY PASS US THROUGH.

But many do reject His purification process, allowing sorcery and divination to come into their spirits and become the prophetic anointing they dispense to a God seeking but ignorant people.

If a prophetic flow is oozing out of you in despite your sinful living and or immoral conduct, you are operating under the spirit of divination and sorcery. An unclean spirit is powering you to speak those words even if you are calling the name of Jesus or quoting the scriptures.

The Holy Spirit does not use unholy vessels. He will first purge and purify a man before using him to speak. That is why the primary hallmarks of the men and women God used in Bible days to speak prophetically was HOLINESS. They were first called “Holy Men of God.” before prophets. But today the story is different.

Our prophets and prophetesses are lesbians and sex addicts. They are masturbators and liars. They prophe-lie and speak under a demonic anointing. They a greedy, covetous, sinful and dirty in spirit yet we call them “men and women of God.”

Even the lay Christians who claim to be moving in the prophetic are no different from these preachers. They have capacity to seduce men and women to sexual infidelity. They lie like the devil and still claim a prophetic call.

They practice all kinds of secret sins calling it weaknesses, yet come out with a prophetic tone that can only be something they stole from genuine prophets of God. They are money and fame driven. The love of money is stronger in their hearts than the love for God.

They are crafty, wicked, and vengeful. They take offense so easily and are good at pointing accusing fingers at others; basically to cover their wickedness and not to bring any change. Of course, no wicked man can bring a positive change to anyone.

If you want to be blessed by God’s Rhema word or move in the genuine prophetic anointing, you must be pure. Your internal fountain as a Child of God must be clean. That is the message this morning!

YOU CAN MAKE THIS SCRIPTURE AN ADDITIONAL MEDITATION FOR THE DAY;

“Nevertheless the solid foundation of God stands, having this seal: “The Lord knows those who are His,” and, “Let everyone who names the name of Christ depart from iniquity.”

But in a great house there are not only vessels of gold and silver, but also of wood and clay, some for honor and some for dishonor. Therefore if anyone cleanses himself from the latter, he will be a vessel for honor, sanctified and useful for the Master, prepared for every good work. 2 Timothy 2:19-21 NKJV