“The law and the prophets were until John. Since that time the kingdom of God has been preached, and everyone is pressing into it. Luke 16:16-17 NKJV 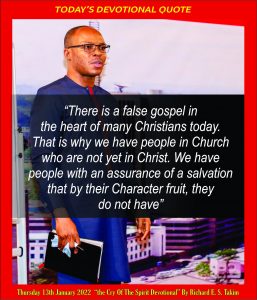 WELCOME TO THE 13TH DAY OF OUR YEAR OF AMAZING GRACE

This is the day the LORD has made, we shall rejoice and be glad in it. He has kept us for 13 days now, we believe He will keep us for the rest of the days. Faithful is He who has called us who also will do it.

In our devotional today, we will be looking at pressing into the Kingdom of GOD. Nothing happens by chance. There must be an effort on our side for kingdom treasures that exist on God’s side to become part of our lives. Diligence and hard work will be required to make our walk with God successful. One area to show that is by pressing into the Kingdom.

Pressing into divine things is actually a spiritual culture that many of us in the church today have allowed spiritual laziness to rob them of.

That is why we must keep pressing from one spiritual goal to another until we are perfected.

You will never be able to live a life that is burning for God, if you do not press into Him on daily bases. The power and prosperity you will generate when you press into spiritual things, like God’s plans, purposes, visions, spiritual goals and etc., especially through prayer and pursuits, cannot be generated by any other thing.

For instance, the Bible reading plan is a pressing into a spiritual goal; the goal is to build our lives around the word of GOD. If we do not put an effort into it, we will not be able to go through the reading plan and fulfill the goal.

Pressing into divine things will generate the power we need to break from the yokes of sin and whatever the enemy may have done in our lives. It will help us to eliminate evil works and even neutralize evil workers around us. It will grant us victory over the three major gates of the enemy; the gates of hell, the gates of death, and the gates of grave.

THERE CAN NOT BE PROGRESS IF THERE IS NO PRESSING IN OUR WALK WITH GOD.

People are playing with the Christian faith. A lot of lies have been peddled about our salvation. There are so many unsaved people in Church who have been given an assurance of salvation that does not exist. By their fruits you know they are still in the kingdom of darkness. It happened, partly because people are not pressing into God and His kingdom.

A major highlight in our devotional text reads;

“…the kingdom of God has been preached, and everyone is pressing into it.”

There are truths to glean form this devotional text. The first is this; if we truly preach the Kingdom of God to the nations, people will press into it. There will be few unsaved believers calling themselves saved. There will be no empty religion but true relationship between men and Jesus Christ. But now we are preaching a self-help gospel, humanistic philosophies, “Churchianity” and denominationalism.

We preach about our churches urging people to come. We preach our Bishops, their books, their blessings and exploits to woo in people into our assemblies. We do not preach the Kingdom of God. We forget that Church is not the Kingdom but a briefing ground for entering the Kingdom life.

One major thing the enemy has done to keep so many souls in church but outside Christ is to put another gospel on the lips of preachers. He is stirring people to run into ministry without waiting to be fully prepared and because they are not fully prepared, they go looking for people’s messages to preach, consequently spreading another gospel.

If the true gospel of the kingdom is preached, at lease serious minded people will press into it. We will have many believers who are truly saved than the number we have today.

THE NEXT TRUTH TO GLEAN FROM OUR TEXT HIGHLIGHT IS WHAT TO PRESS INTO.

Jesus made it clear in His word that we are to press into the kingdom of God. Yes, He said

“…. Since that time the Kingdom of God is preached and many are pressing into it.”

If you do not press into what is preached and taught, it will not change you. You will be hearing and reading so much but remain unchangeable.

However, it all begins form the place of salvation; the place of being born again. The place where the Holy seed or the divine sperm of God enters our hearts and change us on the inside, the way a man’s seed changes a woman’s womb when it enters it.

Just as a woman conceives a child, so also do we conceive righteousness and begin to led a righteous life when the seed comes; that is how the righteousness of God is imputed into us! That is how we enter the Kingdom life.

Sadly, many have seen the kingdom of God – they have not entered into the kingdom life. That is why they live anti-kingdom lifestyles they call Christianity. But that will be a lesson for another day! For today, let us go further to see what the Kingdom of God is.

We can understand it through the many definitions of what it is. One of my most cherished definitions says, the kingdom of God is the governing influence or power of God over a people, influencing their hearts with His word, His will, His plans, His goals, His purposes, or visions.

When the Bible says the Kingdom of God is preached and men presses into it, the Bible simply means this governing influence is proclaimed to men and those who heard are pressing into it by following its ways.

Our job as the church of Jesus Christ remains to understand His word, His will, His plans, His purposes, goals, and visions and spend our days affecting the lost world for the LORD.

The most powerless Christians in the Church today are those who are not pressing into the Kingdom. That is why they are dead spiritually; living in sin without sorrowing for it. That is why you see some exploited by false prophet, derailed pastors, prophets, Bishops, apostles, and prophetesses.

You find them always in need of deliverance.

But the most powerful believers are those who are walking away from religion and Churchianity and pressing into the Kingdom of God. This breed cannot be captured by lying prophets or derailed spiritual leaders. They are not hero worshipers; they do not worship men or women of God. They respect the anointed but worship only the anointed one Himself – Jesus Christ.

WHEN THEY FIND WHERE THE GLORY DWELL, THE LORD MAKES THEM TO LIE DOWN IN THE GREEN PASTURES.

They fight to break the status quo to get tor something deeper and free from the stain of the flesh. These are the ones God is using today as His parliament on earth.

Today’s devotional is to urge you to become one of this special breed of God; people upon whom the kingdom of God will rest on to do things on earth. Men and women God can count on to turn many to righteousness, seeking and saving that which was lost.

Will you accept this special invitation? Will you pay the price? The price is worth the prize. The price is self-denial! It is pressing into the kingdom and walking away from Churchianity. The prize for the price is power with God and favor among men of truth.

There are no words to describe the power and prosperity you will generate on earth if you decide to become a Kingdom citizen instead of just a Church goer! Your enemies will be the first to testify of how powerless they have become in their attacks against you.

LET THIS SCRIPTURE BE AN ADDITIONAL MEDITATION FOR TODAY;

“And you, do not seek [by meditating and reasoning to inquire into] what you are to eat and what you are to drink; nor be of anxious (troubled) mind [unsettled, excited, worried, and in suspense];

For all the pagan world is [greedily] seeking these things, and your Father knows that you need them. Only aim at and strive for and seek His kingdom, and all these things shall be supplied to you also.

Do not be seized with alarm and struck with fear, little flock, for it is your Father’s good pleasure to give you the kingdom!” Luke 12:29-32 AMP