They went out from us, but they were not of us; for if they had been of us, they would have continued with us; but they went out that they might be made manifest, that none of them were of us.

But you have an anointing from the Holy One, and you know all things. I have not written to you because you do not know the truth, but because you know it, and that no lie is of the truth.” 1 John 2:18-21 NKJV 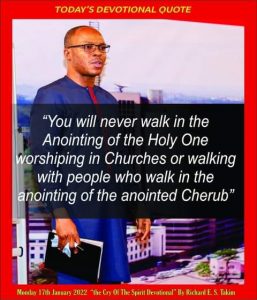 WELCOME TO THE 17TH DAY OF OUR YEAR OF AMAZING GRACE

This is another day the LORD has made, we shall rejoice and be glad in it. He has kept us for 17 days now. We owe Him a lot of thanks. We also owe Him a life governed by the fear of the LORD. Sometimes our hearts can be hardened bringing about the paralysis of His dynamic works among us.

God does not want His works to be quenched in our lives. He will warn us each time we are doing a thing that will make that happen.

Yesterday I received one of such warning from the LORD for doing something I would later learn is capable of quenching His works in my life and disqualifying me after He has qualified me. His words were; “I have qualified you, that is why you see my outbreak by your hands. Do not disqualify yourself and quenching my works.”

I was very exhausted and in the middle of taking some rest when the words came. I was afraid and troubled!

The long and short of the matter is, God does not want His works in our lives quenched and does not want to see us disqualified after He has qualified us for something. And apart from sending us warnings to that effect, he also sends us living truths to live by.

Truths we are to apply to our lives daily. That is the essence of this devotionals and all He have been teaching us through our meetings.

His ultimate aim remains that the good works He has started in our lives is brought to the finish without we truncating anything in the middle ground.

Recently, we just concluded the January Edition of the School of Eternal life. The depths of truth that God unfolded to us was indeed out of this world. They can only come from the world of God Himself.

One of the revelations that stood out for me was the description of Michael the arch-angel and what he was created to do. If that did not make us want to live a life of no-iniquity, then I don’t know what will.

THAT THE EXPOSE GAVE US AN UNDERSTANDING WHY HE IS THE ANGLE IN-CHARGE OF WARFARE IN GOD’S KINGDOM.

The manifestation of the Spirit that closed the session yesterday in the lives of precious hearts yearning for more of God was also out of this world. The deliverances and angelic ministration were strong; the instantaneous miracles we witnessed bore a strong testimony to this fact. I saw the power of knowing in demonstration.

That is why the pursuit of the knowledge of the Holy One concerning all aspects of our lives should not cease. We must keep on running after God, keep on pursuing His knowledge. He will keep coming on us like the rain; like the former and the later rains in the first month if we do.

But like the generation of Noah, I don’t think every soul will agree to enter this ark of running after the Knowledge of the Holy One. I consider those who participated as a people who found grace in the sight of the LORD to seat at the feet of the Master – Jesus Christ; and learn things that God ordained for our age and time.

WE WILL NEVER PROSPER IF WE DO THAT.

Like every good Father will desire for his Children, God wants every of His Child to prosper. But there is a lifestyle that must be adopted for that to happen. Sadly, some are not prospering because, apart from not living a life of truth, they do not understand what financial prosperity is all about.

Some even believe financial Prosperity is not for the righteous. They believe that poverty and adversity is a mark of true discipleship. That is not true. A true disciple is one with the friend ship with God to live the life of Christ on earth, which places one about the riches of this world.

Once you are placed above the riches of this world, you will not lack the way Jesus never lacked. The power of God will always be present to make provisions available to you, and if you are called to function as God’s financial warrior, your business will not lack a favor from God called “the power to get wealth.”

So, poverty is not synonymous with discipleship. The error began when the leadership of a particular church group in history was induced by the rich, to keep members of that church group working for their establishments without asking for a pay rise.

The church leaders receive money from the owners of the establishments in return. Then it grew over the years through that Church and spread to the whole world.

Yes, Jesus said if we want to be His disciples, we must carry our cross daily and follow Him. But that cross is not perpetual poverty and adversity but the price of doing divine will. But the leaders presented the cross as suffering and all forms of financial hardship, and the people accepted since they wanted to please God.

When the Bible says Jesus became poor for us to become rich, it was not the poverty of economic hardship that was referred to. But the poverty of His glory. He stripped Himself of His glory in Heaven and came to the earth; becoming poor of that glory.

THE PURPOSE WAS FOR US TO BECOME RICH WITH IT. IT HAS NOTHING TO DO WITH FINANCES.

For Joseph, he became the prime minister of Egypt, the Senate president, a father to Pharaoh and a minister of Agriculture for 90 years. That tells us what a disciple of Christ is capable of becoming if he or she knows and agrees to God’s call upon our lives to save lives. Do not limit your life by walking in errors or worldly lies.

Unleash your financial destiny by walking in truth and kingdom light. The Bible says;

“how God anointed Jesus of Nazareth with the Holy Spirit and with power, who went about doing good and healing all who were oppressed by the devil, for God was with Him.” Acts 10:38 NKJV

When we become anointed with the Holy Ghost and power, things will become financially well with us. Our business will pick, and all limitations broken. The reason is because the anointing thrust a man into the glory. When you are thrusted into the glory, wealth and riches will begin to happen to you.

David was thrusted to the glory by the anointing and became so rich that he made all provisions available for the building of the temple. He laid the foundation for the prosperity of his son Solomon, who God’s glory made the richest man to have ever lived.

GOD CANNOT BE MOCKED BY SUCH NONSENSE.

Praise the LORD! Blessed is the man who fears the LORD, who delights greatly in His commandments.

His descendants will be mighty on earth; The generation of the upright will be blessed. Wealth and riches will be in his house, and his righteousness endures forever. Psalm 112:1-3 NKJV

..But you have an anointing from the Holy One, and you know all things. I have not written to you because you do not know the truth, but because you know it, and that no lie is of the truth.

“But the anointing which you have received from Him abides in you, and you do not need that anyone teach you; but as the same anointing teaches you concerning all things, and is true, and is not a lie, and just as it has taught you, you ]will abide in Him.” 1 John 2:27 NKJV

I believe the message of today’s devotional has been passed.

God wants to spread His work using the prosperity of the righteous not that of the wicked. And He is waiting on you to come into His true anointing for your life so that it can convey you into His Glory for the wealth that awaits you. May we not disappoint Him in any way! Amen and amen.

“Again proclaim, saying, ‘Thus says the Lord of hosts: “My cities shall again spread out through prosperity; the Lord will again comfort Zion, and will again choose Jerusalem.”‘” Zachariah 1:17 NKJV