“And I thank Christ Jesus our Lord who has enabled me, because He counted me faithful, putting me into the ministry, although I was formerly a blasphemer, a persecutor, and an insolent man; but I obtained mercy because I did it ignorantly in unbelief.

And the grace of our Lord was exceedingly abundant, with faith and love which are in Christ Jesus. This is a faithful saying and worthy of all acceptance, that Christ Jesus came into the world to save sinners, of whom I am chief.

However, for this reason I obtained mercy, that in me first Jesus Christ might show all longsuffering, as a pattern to those who are going to believe on Him for everlasting life.” 1 Timothy 1:12-16 NKJV 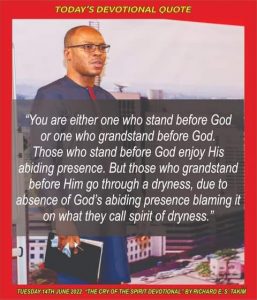 WELCOME TO THE 165TH DAY OF OUR YEAR OF AMAZING GRACE

We give God the glory for His marvelous kindness and for giving us life this morning. Many of us do not deserve to be alive but He has kept us all these years, months, weeks and days. It is important that we give Him thanks.

The best kingdom to belong to is the kingdom of God. Even if you do not have the best that this life can offer, because you belong to the Kingdom of God, you have a better hope and future lying ahead of you. A more glorious life will start for you at the end of your days on earth.

We have been looking at the cry of the Spirit on matters of fear, and today is the 14th day of this 30-day journey of faith.

Let us start today’s word by reminding ourselves that sin remains a One major seed of fear in the human race. Sin is one thing that takes away a man’s boldness to even stand before God.

If you are one who grandstand you will be suffering from what they call spirit of dryness in deliverance circles. Spiritual dryness is a life without the abiding presence of God. People who grandstand before God go through that a lot, blaming it on demons.

Most Christians grandstand before GOD. That is why they do not leave His presence with the benefits of standing before Him. Very few stand before God.

If you are one of those who grandstand before God, instead of standing before Him, you will never enjoy the rain of His presence that should be falling on your life, family, ministry and all that concerns you.

But Our devotional text is about one of those who lived in the days after the cross, apostle Paul; a man with GOD’s authentic grace. He showed us how not to grandstand before God.

THOSE WHO DO NOT GRANDSTAND BEFORE GOD ENJOY THE GOODNESS OF GOD MORE THAN THOSE WHO DO.

You see, Our God can be sentimental when dealing with us sometimes. The Bible says He pities us like a father pities his children. The Bible also says He knows our frame, we do not need to tell Him anything about it in prayer before He do something about it. He treats us differently. But none of this will happen if we grandstand before Him.

For instance, when we fall into sin, He does not just rush to punish us. His first approach is always to offer a return-to-righteousness grace and truth. He will not want us to feel unwanted and walk away from Him as a result of our sins. He will urge us to rather run back to him in search of grace and truth to return to righteousness.

It may interest you to know that the first path to finding the grace and truth to return to righteous ways is the pathway of godly sorrow, where you begin to feel so bad and so sorrowful about the sin you committed.

Then as you seek the LORD for mercy, it begins to manifest further sometimes as rebukes and reproves. Other times as words of encouragement to pick up the pieces and go back to GOD.

He will treat us as morally sick persons who need special help, giving us the Holy Ghost attention that we need but do not deserve. It is called mercy! That is why it is not good to grandstand before God like the Pharisee. It is good to always stand before Him looking for His help even if there is no practice of sin in your life.

Understand that just as sick people are not treated by doctors as unwanted so it is with God. No sinner who is in need of help is treated as unwanted by GOD. Only the sinners who say they are righteous and do not need a savior perish both in time and eternity.

ONE MAJOR REASON WHY WE SHOULD NEVER GRANDSTAND BEFORE GOD IS BECAUSE WE ARE SINNERS AT DIFFERENT LEVELS, AND LET ME EXPLAIN.

There are three levels which I will call three reason why we are sinners. Some of us are sinners not because we are living in Sin, but because sin is living in us but we have been washed by the blood and no longer live in it.

The Bible says this concerning them;

Though by redemptive status they are no longer sinners, but call themselves sinners sometimes because of their hate for the sin nature that lives in them and because they do not want to grandstand before God. Paul was one of them. Our devotional text captured what he said about himself.

“And the grace of our Lord was exceedingly abundant, with faith and love which are in Christ Jesus. This is a faithful saying and worthy of all acceptance, that Christ Jesus came into the world to save sinners, of whom I am chief.” 1 Timothy 1:14-15 NKJV

Paul was a sinner type who had sin living in him, like every one of us, but he stopped living in it the day He met the LORD in His resurrected form on the way to Damascus.

Sadly, many today have not met Him in His resurrected form.

When you truly meet the resurrected Christ, He will inject His Holy Spirit into your heart and bring you to the level of no longer living in the sin that is living in you. You may fall into it but will always return to a life of not living in sin through godly sorrow that leads to repentance.

Sinners at this level are ex-sinners actually. They are no longer seen by the LORD as sinners. That is why it is wrong to justify a life of sin by saying “we are all sinners.” That statement usually comes from the mouths of those who grandstand before GOD.

BUT PAUL TAUGHT US HOW NOT TO GRANDSTAND.

You find him (though not living in sin) moving from the humble acknowledgement of the fact that sin still lived in him and what it made him to do in time past (calling himself chief sinner), to his new God given status; (not just a saved and sanctified child of God but) a pattern to us who have believed in Christ and many others who will believed in Him.

“However, for this reason I obtained mercy, that in me first Jesus Christ might show all longsuffering, as a pattern to those who are going to believe on Him for everlasting life.” 1 Timothy 1:16 NKJV

The second reason many of us are sinners is because we live in the sin that is living in us.This is what even make us sinners before God even if we are preachers.

Salvation should deliver a man from living in the sin that is living in him. Sadly, many do not even have this kind of salvation, which is the true salvation that the resurrected Christ gives.

When we are sinners at this level, we live in the sin that lives in us with a reckless abandon saying we are humans. This set of sinners are found in places of worship, even among religious leaders, and outside the world of religion.

SINNERS AT THIS LEVEL ARE SYNCHRONIZED WITH THE SIN NATURE AND SEE A LIFE OF SIN AS NOTHING TO WORRY TOO MUCH ABOUT.

While some others in this set do not care about anything, not even the condemnation of hell. It is sinners at this and the third level that are condemned.

Sadly, so many are sinners at this level.

Sinners at this level know how to grandstand before GOD, even saying they have no sin in their lives, thereby not even acknowledging the presence of sin that is different from the practice of sin.

To them sin is what you say it is.

This is a dangerous level of sinning because it prepares the heart to become a sinner at the third and most dangerous level. Which is the level of being a sinner because both sin and Satan live in you and you also live in them. It is called the communion of iniquity.

Most women are married to this kind of sinners. Most men too. There are godly kids with these kind of sinners as parents. It is usually not easy to share same roof with this type.

Sinners at this level support only things that look like God’s will; things you will never know are not God’s will until the light of scriptures shine on them.

Sinners at the third level live in the sin and the devils that lives in them and are very effective weapons of war in the hands of the evil one. They are the ones the kingdom of GOD called “the host of Satan on the face of the earth” or “the seeds of the evil one.”

GOD’S ETERNAL JUDGMENT IS FOR THE LAST TWO LEVELS OF SINNERS.

The eternal judgment is called the great white throne judgment.

No matter what kind of sinner you want to be, please do not be the sinner that falls in the last two categories. Be the Paul kind of Chief sinner, who no longer live a life of sin, but a life of God, serving his generation according to the will of God and not grandstanding before him.

The first set of sinners have made peace with the LORD and have become His righteousness on the face of the earth.

They are ex sinners by God’s judgment and have become part of His family. The last two sets are His enemies and will be cast into the lake of fire if they do not join the first set by coming to the LORD and embrace a life of righteousness, peace and joy in the Holy Ghost.

I believe the LORD has spoken to us this morning. It is now our choice the kind of sinner we want to be.

The first set are actually no longer sinners before God but blood washed and word sanctified saints, who are in the narrow way that leads to life. They do not worship in Churches where Baal and the demon of deliverance reign. They worship where Christ reign.

They understand that they are to live as a living sacrifice unto God and sweet-smelling savor to his nostrils so that He can find a people to walk with in the final execution of His redemptive plans.

It is my prayer that GOD will use these words to continue to build us up and give us an inheritance among they that are sanctified.

“Elijah the Tishbite, of the temporary residents of Gilead, said to Ahab, As the Lord, the God of Israel, lives, before Whom I stand, there shall not be dew or rain these years but according to My word.” 1 Kings 17:1 AMPC