For to be carnally minded is death, but to be spiritually minded is life and peace. Because the carnal mind is enmity against God; for it is not subject to the law of God, nor indeed can be. So then, those who are in the flesh cannot please God.

But you are not in the flesh but in the Spirit, if indeed the Spirit of God dwells in you. Now if anyone does not have the Spirit of Christ, he is not His.” Romans 8:5-9 NKJV 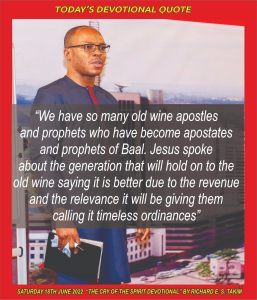 WELCOME TO THE 169TH DAY OF OUR YEAR OF AMAZING GRACE

The LORD has been good to us and His mercies that endures forever has done amazing things in our lives.

For 169 days of this year He has kept and watched over us. He has not allowed the rod of the wicked to rest upon us. He has been doing what He has a History of doing.

Indeed, as a father pities His children, so the LORD pities those who fear Him. He knows our frame and has given us sufficient help to overcome so much that would have limited us.

To Him belong all the glory!

Like we said yesterday, our God will not be tired of bringing swift interventions to us, even if they do not come in the times or patterns that we expect them to come.

At the start of this month we began a journey with the Cry of the Spirit on fear; in others words, God voice in the Holy Scriptures on fear. It has been a beautiful journey and fresh dimensions of faith are rising within us replacing all unrighteous fear in our hearts.

Each time I read scriptures like Hebrew 11 and see how our fathers served the LORD with boldness in their dispensation, which was even a showdown of what is to come, I marvel at the absence of fear in their hearts.

For instance, when I consider Gideon and his rise to becoming a warrior, Barak, Jephthah, and then David and Samson who both killed lions, and others quenched the violence of the fires of their enemies without present day weapons of war, but with their bare hands, I begin to wonder what kind of a heart they had.

The Bible called them people who stopped the mouths of lions. It says;

“And what more shall I say? For the time would fail me to tell of Gideon and Barak and Samson and Jephthah, also of David and Samuel and the prophets:

quenched the violence of fire, escaped the edge of the sword, out of weakness were made strong, became valiant in battle, turned to flight the armies of the aliens. Hebrews 11:32-34 NKJV

IF YOU LOOK AT THIS SCRIPTURE, IT IS CLEAR THAT YOU CAN NOT DO ANY OF THESE FEATS THROUGH FEAR.

They can only be done through faith. Faith comes by hearing or seeing into the will and plans of God at an immediate present. In the midst of war, or in the day of adversity, fear will prevail until that happens. That is why fearful and dying people becomes bold, fearless, and thriving people as soon as they hear or see from GOD.

You will always experience a turn around each time you hear or see from God.

That brings us to one of the major secrets in GOD’s kingdom for overcoming fear; a life in the Holy Ghost. We call it life in the Spirit.

Living and Walking in the Spirit is therefore one big way to overcome fear. That reminds me of the life of apostle Paul and all he went through. He said in his own words;

“From the Jews five times I received forty stripes minus one. Three times I was beaten with rods; once I was stoned; three times I was shipwrecked; a night and a day I have been in the deep;

in weariness and toil, in sleeplessness often, in hunger and thirst, in fastings often, in cold and nakedness— besides the other things, what comes upon me daily: my deep concern for all the churches.

NOW, DUE TO THE FRAILTY OF HUMANITY, IT IS NOT POSSIBLE TO GO THROUGH ALL THESE STATED THINGS AND STILL BE BOLD AT ALL IN LIFE.

I remember meeting ladies who were raped. Some of them developed a phobia for men. If bad things happen to you like the ones that happened to God’s servant apostle Paul, you will develop a phobia for them.

A phobia is an extreme or irritational fear of something that compels you to avoid whatever stimulates it.

Paul went through what he went through for preaching the gospel. If he had developed a phobia from those experiences, he would not have attempted preaching again in life. But what strikes me is why any of that did not happen despite the terrible things he faced.

There was a time he was bitten by a snake and he did not panic. He just shook it off his arm and threw it into the fire. Paul was an unusually man who have been an inspiration for warriors of righteousness from age to age.

If you read Church history, you will realize that most revivalist and apostles stood on Paul’s walk and talk with God to unleash their destiny. He is a standard for all to meet.

That is why when I heard that little Baby in ministry saying “by what he knows to be the Character of God Paul was wrong in certain thing he said,” I marveled at what kind of devils we have these end times working in up-coming preachers that we thought have gotten things right.

Paul remains an epitome of life in the Spirit and a standard for walking in boldness before devils. When you walk in the Spirit the way he did, none of what you go through can instill your heart with fear.

He was not a man who walked in the flesh. He never walked in “sense and reason without the Holy Spirit.” If he had walked, he would have developed a phobia from all he went through. It is when we go through adversity while within the sphere of sense and reason without the Holy Spirit, that we develop fears from what we go through.

For to be carnally minded is death, but to be spiritually minded is life and peace. Because the carnal mind is enmity against God; for it is not subject to the law of God, nor indeed can be. So then, those who are in the flesh cannot please God.

But you are not in the flesh but in the Spirit, if indeed the Spirit of God dwells in you. Now if anyone does not have the Spirit of Christ, he is not His.” Romans 8:5-9 NKJV

The central truth of this scripture says “to be carnally minded is death.” To walk in the flesh is death.

Child of God, it is impossible not to walk in fear if you are not walking in the Spirit. The classic edition of the amplified version of the Bible put the central truth of our devotional text this way;

“Now the mind of the flesh [which is sense and reason without the Holy Spirit] is death [death that comprises all the miseries arising from sin, both here and hereafter]. But the mind of the [Holy] Spirit is life and [soul] peace [both now and forever].” Romans 8: 6 AMPC

This rendering further expanded what the word death captures. It comprises of all the miseries arising from sin, both here and hereafter. There are indeed no words to describe all the miseries that sin bring to the human life. Most of the very things we do blame on Satan are caused by sin.

The diseases, the deaths, the wars, the curses of life, the incessant attacks we face from unclean spirits and all that.

YOU CAN NOW SEE WHY MEN LIKE PAUL WERE NOT CARNALLY MINDED.

You can see why that generation gave themselves to prayer and the ministry of the word and did all they could to stay in the Holy Ghost. The doorway of unleashing the miseries of sin into our lives here and hereafter is a life that is carnally minded.

It was the very mind that saw Paul through all he went through. It helped him to come out without developing a phobia for preaching the gospel. The beatings, stoning and treatments he got for the same did not make him afraid.

In fact, there was a time he was beaten and left for dead. Then the brethren came around him and prayed, after that he got up and went back into the same City to continue from where he stopped. The man was a lion because of the Spirit of the Lion of the Tribe of Judah living in him.

He was never afraid, people were the ones afraid for him.

At one time even a prophet used his prophetic anointing to advise him not to go to Jerusalem. They were all afraid for him. The prophet did what some misled preachers are calling prophetic act, and demonstrated his fear for Paul’s life. But Paul said;

“…What do you mean by weeping and breaking my heart like this? For I hold myself in readiness not only to be arrested and bound and imprisoned at Jerusalem, but also [even] to die for the name of the Lord Jesus.” Acts 21:13 AMPC

Look at that word, “for I hold myself in readiness” that is the spirit. That is what you see in the lives of those with the lion of Judah on their inside. They hold themselves in readiness and are not deterred of anything the enemy may do to them directly and indirectly.

You can’t terrorize them with prophecies or dreams even if they are from your version of God. Agabus was a prophet of God who was yet to come into the New Testament Prophetic ministry. He was one of the remnants of the Old Testament system that was left shortly after the cross.

He was of the stock of the Old Wine Jesus came to do away with. And Paul knew that very well hence not listening.

Sadly, we have so many Old Wine Prophets in Church today. Most of them have become prophets of Baal.

There will always be a remnant of the Old stock loitering around because Jesus said there is generation that will always say the old wine is better and will not want the new. They are the ones that will be troubling us with the Old Wine and refusing to step into the new.

“ While we were remaining there for some time, a prophet named Agabus came down from Judea.

And coming to [see] us, he took Paul’s belt and with it bound his own feet and hands and said, Thus says the Holy Spirit: The Jews at Jerusalem shall bind like this the man who owns this belt, and they shall deliver him into the hands of the Gentiles (heathen).

When we heard this, both we and the residents of that place pleaded with him not to go up to Jerusalem.

Then Paul replied, what do you mean by weeping and breaking my heart like this? For I hold myself in readiness not only to be arrested and bound and imprisoned at Jerusalem, but also [even] to die for the name of the Lord Jesus.

And when he would not yield to [our] persuading, we stopped [urging and imploring him], saying, The Lord’s will be done!

After these days we packed our baggage and went up to Jerusalem. Acts 21:10-15 AMPC