“There shall come forth a Rod from the stem of Jesse, and a Branch shall grow out of his roots.

His delight is in the fear of the LORD, And He shall not judge by the sight of His eyes, Nor decide by the hearing of His ears;” Isaiah 11:1-3 NKJV 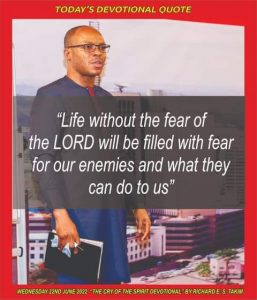 WELCOME TO THE 173RD DAY OF OUR YEAR OF AMAZING GRACE

We bless the LORD for another day. We bless Him for granting us mercy and peace. We bless Him for not allowing the intentions of the wicked one to come to fruition. We will ever remain grateful to our God for being our all an all.

I do not think there is a day that has passed this year that has lacked a great manifestation of God’s amazing grace in our lives. When God speak, He moves to authenticate what He said.

The LORD has been speaking to us on matters of fear and faith. It is a 30-day journey of faith with the Cry of the Spirit. Today is the 22nd day of the journey and our God has again and again, affirmed that He has not given us the spirit of fear but of power and of sound mind.

However, there are spirits of fear that are welcome (and sometimes created by God) in His Kingdom. We will begin to look at them as we wine up this journey.

The first spirit of fear that is allowed in God’s kingdom is the spirit of the fear of the LORD.

The devil will allow us to have other fears but not this one. He knows people with this one enjoys so much heritage from the LORD. One of the heritages they enjoy is expectations that comes to pass. And the enemy love seeing our expectations fail and our hope cut off except if they are aligned with his wicked intentions.

That is why the Bible says;

“Do not let your heart envy sinners, but be zealous for the fear of the LORD all the day; For surely there is a hereafter, and your hope will not be cut off.” Proverbs 23:17-18 NKJV

If we are zealous for the fear of the LORD, we will generate enormous heavenly power that will keep devils at bay. They will not even come close except for what they use people to do around us which will also give God the opportunity to demonstrate His power in our lives. What the zeal for the fear of the LORD will do to us, even prayer cannot accomplish.

NOW, I AM NOT DESPISING PRAYER. IT IS JUST THAT PRAYER WITHOUT THE FEAR OF GOD IN A MAN’S HEART CANNOT BE ANSWERED.

The fear of God is designed to be the foundation of all we do with God. Zeal for it brings power from Heaven into our lives and gets us connected to covenant blessings in God’s kingdom. You can see that in the life of the son of Aaron. The Bible says;

“Now Israel remained in Acacia Grove, and the people began to commit harlotry with the women of Moab.

They invited the people to the sacrifices of their gods, and the people ate and bowed down to their gods. So Israel was joined to Baal of Peor, and the anger of the LORD was aroused against Israel.

Then the LORD said to Moses, “Take all the leaders of the people and hang the offenders before the LORD, out in the sun, that the fierce anger of the LORD may turn away from Israel.”

So Moses said to the judges of Israel, “Every one of you kill his men who were joined to Baal of Peor.”

Now when Phinehas the son of Eleazar, the son of Aaron the priest, saw it, he rose from among the congregation and took a javelin in his hand; and he went after the man of Israel into the tent and thrust both of them through, the man of Israel, and the woman through her body. So the plague was stopped among the children of Israel.

And those who died in the plague were twenty-four thousand.

Therefore say, ‘Behold, I give to him My covenant of peace; and it shall be to him and his descendants after him a covenant of an everlasting priesthood, because he was zealous for his God, and made atonement for the children of Israel.’ ” Numbers 25:1-13 NKJV

THERE ARE TWO AGES WHERE BELIEVERS IN CHRIST LIVED.

They had the fear of God in their hearts and moved according to the justice system and underlining truths of that dispensation.

So, killing a man who is committing sexual sin and the partner with a spear was allowed then. God sanctioned it because of His justice system then, and the underlining truths guiding them allowed for that. But when Jesus became flesh and lived physically among men, He did not allow the woman caught in adultery to be stoned because He saw what the law could not see in sinners.

The law was blind because the Holy Spirit was not yet given to animate it. So, it could not see a heart of repentance or a glorious future that awaits a sinner if shown mercy.

However, what we can see in the numbers 25:1-13 story is what a man’s zeal for the fear of the LORD can move him to do; it can move him to enforce righteousness where wickedness is perpetuated. Today, that will not happen by killing people but by killing the spirit, mindset, and paradigm that is making people act that way, using scriptural truths one may not even want to hear.

God turns such situations around by circumcising the hearts of those involved not by moving people to kill them with spears.

ANOTHER HERITAGE OF THE FEAR OF THE LORD IS A SURE FUTURE; A FUTURE THAT THE DEVIL CANNOT DESTROY OR PREVENT.

In fact, the fear of the LORD puts him and all his work away from our lives, reducing him to a mare persecutor. He will not be able to successfully attack us, because our God will always return with double blessings for our troubles like in the case of Job. The Bible says;

“Mark the blameless man, and observe the upright; For the future of that man is peace. But the transgressors shall be destroyed together; The future of the wicked shall be cut off.

But the salvation of the righteous is from the LORD; He is their strength in the time of trouble. And the LORD shall help them and deliver them; He shall deliver them from the wicked, and save them, because they trust in Him.” Psalm 37:37-40 NKJV

The help of God and the future that awaits us if we walk in the fear of God is beyond human description. That is why the Bible says they should mark the blameless man. The help of God that will come your way if you fear God is amazing. He will help you, He will deliver you from the wicked and save you because you trust in Him or you fear Him.

One of the greatest spirits that rested on Jesus when He became flesh was the spirit of the fear of the LORD. That was why He generated so much power that the world is yet to recover from.

“There shall come forth a Rod from the stem of Jesse, and a Branch shall grow out of his roots.

His delight is in the fear of the LORD, And He shall not judge by the sight of His eyes, Nor decide by the hearing of His ears; Isaiah 11:1-3 NKJV

From this text it is clear that there are seven spirits of the LORD that comes upon us when we become Throne Room Christians.

THE SPIRIT OF THE FEAR OF THE LORD IS ONE OF IT.

As we bring this to a close, I want to submit to us that what the fear of the LORD will do to us in time and eternity is much bigger than what anything else in God’s kingdom does. That is why fearing God is the first step a man takes towards becoming wise. It is the beginning of wisdom.

Sadly, we preachers have made our members to be fearing us instead of fearing God.

There is a replacement of the fear of the LORD with the fear of preachers these days. That is why the eternal lives of many are in danger. It is my prayer that God will keep using His words to build us up and give us that final glorious inheritance among they that are sanctified.

LET THIS SCRIPTURE BE AN ADDITIONAL MEDITATION FOR US TODAY!

“Let us hear the conclusion of the whole matter: Fear God and keep His commandments, For this is man’s all. For God will bring every work into judgment, Including every secret thing, whether good or evil.” Ecclesiastes 12:13-14 NKJV