“By faith Enoch was taken away so that he did not see death, “and was not found, because God had taken him”; for before he was taken he had this testimony, that he pleased God.

But without faith it is impossible to please Him, for he who comes to God must believe that He is, and that He is a rewarder of those who diligently seek Him.” Hebrews 11:5-6 NKJV 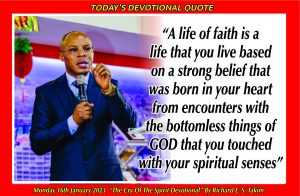 WELCOME TO THE 16TH DAY OF OUR YEAR OF SIGNS AND WONDERS!

Signs and wonders are not just miracles, but indicators or symbols. You find all that in the lives and times of our Bible fathers. We believe we also will be experiencing not just the miraculous wonders of God but prophetic indicators and symbols that will bring very vital messages to us.

Meaning, we should all be on the lookout for such flow of the Spirit.

It pleases the LORD that we start this year with a 31-day journey with the Cry of the Spirit on Visionary Living. One of the profound insights we have received on visionary living presents it as a life in the Spirit, where Him who is invisible (GOD), lead us through one season of life to another, to do His will and walk in His ways, until we get to the finishing line of our lives on earth.

That kind of life is not possible without laws that governs it. The laws must be known, understood and applied to our earthly lives for it to be possible.

WE ARE NOW ON THE LAW OF FAITH.

“Now faith is the substance of things hoped for, the evidence of things not seen. For by it the elders obtained a good testimony.

From this scriptural definition of faith, we have seen the first law of faith. Other definitions that we can see says faith is an assurance or a confirmation of things that have become real to our spiritual senses but are yet to come into natural reality; in other words, are yet to become visible.

They only register in our hearts as convictions, born from real spiritual facts that have been revealed to our spiritual senses but not our natural reality.

We discovered that genuine faith will perceive as real facts things that are not yet to be revealed to one’s natural sense. It will create an assurance or a confirmation that functions as proofs of the existence of spiritual things. John the beloved, one of the early Church fathers, expressed his own faith this way;

We can see another law of faith here. It is presented as a complete hope or confidence in God, born out of what one has heard, seen, looked upon, and handled in the realm of the Holy Spirit concerning the word of life. That complete hope and confidence will manifest as a strong belief in God, His word or His bottomless things, based on strong convictions rather than physical proofs.

Based on this law, whatever we hear, see, look upon or handle in the realm of the Holy Spirit, will birth a strong belief in us that is not based on physical proofs, and move us to do things that are called faith actions.

When they were face to face with the consequence of not obeying the king, they had a strong belief that God will save them. Though there was no physical proof but they had convictions that were born out of things their spiritual senses had touched, handled or looked into in the realm of the Spirit.

The Bible captured their faith action in these terms;
“Shadrach, Meshach, and Abed-Nego answered and said to the king, “O Nebuchadnezzar, we have no need to answer you in this matter.

But if not, let it be known to you, O king, that we do not serve your gods, nor will we worship the gold image which you have set up.” Daniel 3:16-18 NKJV

The result of their faith action was amazing. What they heard, saw, touched and handle, or looked into, concerning the word of life of their dispensation, that propelled them to believed God, and take such daring faith action against the king, manifested. In New Testament terms, we can say, their faith in the Son of God brought the Son of God into their fire.

That was visionary living in demonstration, and the result of the same. The Bible says;

“Therefore, because the king’s command was urgent, and the furnace exceedingly hot, the flame of the fire killed those men who took up Shadrach, Meshach, and Abed-Nego.

And these three men, Shadrach, Meshach, and Abed-Nego, fell down bound into the midst of the burning fiery furnace.

Then King Nebuchadnezzar was astonished; and he rose in haste and spoke, saying to his counselors, “Did we not cast three men bound into the midst of the fire?” They answered and said to the king, “True, O king.”

“Look!” he answered, “I see four men loose, walking in the midst of the fire; and they are not hurt, and the form of the fourth is like the Son of God.” Daniel 3:22-25 NKJV

THIS STORY TELLS US THAT OUR FAITH IN CHRIST WILL ALWAYS RESULT IN THE MANIFESTATION OF CHRIST IN OUR LIVES.

That is why without faith, it is impossible to please God. In simple terms, without touching the bottomless things of God with your spiritual senses, it is impossible to please God. All who were before us pleased God by a strong confidence or belief that was born in them when they touched the bottomless things of God in their dispensations. From Abel to Enoch, and to Noah and to the rest of them that were mentioned in Hebrew 11.

“By faith Enoch was taken away so that he did not see death, “and was not found, because God had taken him”; for before he was taken he had this testimony, that he pleased God.

But without faith it is impossible to please Him, for he who comes to God must believe that He is, and that He is a rewarder of those who diligently seek Him.” Hebrews 11:5-6 NKJV

Do not live a Christian life that is not born out of a faith you caught when you experienced God yourself. It will not lead you to Heaven.

It is the faith we catch after touching the bottomless things of GOD that will help us to live lives that please Him. That faith will propel us to take faith actions that will bring into manifestation (into our lives) whatever we may have heard with our spiritual ears, seen with out spiritual eyes, and handled or looked into concerning the word of life.

Visionary living is actually a manifestation of faith. It is a life of faith.

I hope you understand me!

When we say “we are saved by faith” it means we are saved by a confidence developed from the bottomless things of God that one has touched about his or her salvation. And that confidence will in turn transform into actions of faith that can be described as a life of the fear of GOD, manifesting in purity, right standing with God, holiness and intimacy with Christ.

That is why faith without such manifestations is dead, or we can say does not exist. Genuine faith will have proofs or fruits to show that it is there (read James 2). We call that character fruits.

As always, there is so much on faith, but some of the most critical parts of the subject have been shared. And that is enough for the day. It is my prayer that these revealed truths will enable us to lead visionary lives in Jesus precious name. Amen!

“By faith Noah, being divinely warned of things not yet seen, moved with godly fear, prepared an ark for the saving of his household, by which he condemned the world and became heir of the righteousness which is according to faith.

By faith Abraham obeyed when he was called to go out to the place which he would receive as an inheritance. And he went out, not knowing where he was going.

By faith he dwelt in the land of promise as in a foreign country, dwelling in tents with Isaac and Jacob, the heirs with him of the same promise; for he waited for the city which has foundations, whose builder and maker is God. Hebrews 11:7-10 NKJV