“You therefore, my son, be strong in the grace that is in Christ Jesus.

And the things that you have heard from me among many witnesses, commit these to faithful men who will be able to teach others also. You therefore must endure hardship as a good soldier of Jesus Christ.

No one engaged in warfare entangles himself with the affairs of this life, that he may please him who enlisted him as a soldier.

And also if anyone competes in athletics, he is not crowned unless he competes according to the rules.” 2 Timothy 2:1-5 NKJV 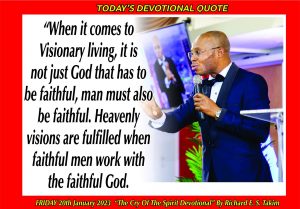 WELCOME TO THE 20TH DAY OF OUR YEAR OF SIGNS AND WONDERS!

This is the Day the LORD has made, we shall rejoice and be glad in it. He has been so good to us and amazing in His works towards us. We are alive because of His marvelous deeds in our lives.

It has been 20 days of free flow of air in our lungs, free flow of our excretive systems, free flow of blood in our vein, free manufacturing of our white and red blood cells, sleeping and waking up, and for those who are not fasting, being able to eat and swallow the food, and some other things our words cannot capture.

Some of these things we just mentioned, may not make sense to you until you visit the hospital and find people who need machines for them to be able to do all we are doing freely.

There are people who pay dearly for the air they breathe in; others spend daily to be able to experience excretion. But here we are, able to do all and much more natural. If that is enough for us to thank God for, then we do not know what God has done for us.

Visionary living is all about being faithful to a Heavenly vision. If you do not have the required faithfulness for God to use in making His faithfulness meaningful in your life, you will still be a reproach in life despite His faithfulness to you.

FOR INSTANCE, GOD WAS FAITHFUL TO SAMSON.

It was the loss of Samson’s faithfulness that led to his problems in the first place. He lost it in the house of Delilah. So long as his faithfulness was intact, he was a glory to behold. But when it was lost, he became a reproach. The Bible says;

Then she lulled him to sleep on her knees, and called for a man and had him shave off the seven locks of his head. Then she began to torment him, and his strength left him. Judges 16:18-19 NKJV

Samson was plugged to visionary living even before his birth. God handed over laws that he was to keep. It was a kingdom culture for people of God given visions that had spanned for generations. He does not give us rules for fun, He gives us rules or things to be committed to while we run with His vision for our lives basically to extract faithfulness from us.

It is the faithfulness He extracts from us that His own faithfulness needs to bring His visions, callings, assignments and etc. on our lives fulfilment. That means we are not to break His rules or withdraw our commitment. If we do, we will lose our faithfulness, making it impossible for His faithfulness to be meaningful in our lives.

That is one major truth we can glean from the life of Samson.

You see, when God called him, God made him to understand that his faithfulness would be required for his life to fulfill its purpose. Visionary living is all about our lives fulfilling their purposes.

Samson was to commit to keeping his hair untouched and the secret to himself. He was faithful in doing that until he met Delilah.

WHEN HE MET DELILAH, HE LOST HIS FAITHFULNESS.

When he lost his faithfulness, he lost what God was using to make him a sign and a wonder in the land. That was when the enemy made him a reproach and laughing stock in the land. They plucked out his eyes, and made him a grinder in prison. The Bible says;

So he awoke from his sleep, and said, “I will go out as before, at other times, and shake myself free!” But he did not know that the LORD had departed from him.

Then the Philistines took him and put out his eyes, and brought him down to Gaza. They bound him with bronze fetters, and he became a grinder in the prison.” Judges 16:20-21 NKJV

If you want to see the beauty of God’s faithfulness, make your own available. Be committed to God, His ways and His will.

The faithful God can only neutralize the gates of hell on earth by the faithfulness of faithful men and women. That brings us to our devotional text. The text was a charge Paul gave to Timothy which aligned greatly with the flow of divine truth on the subject matter. He said to Him;

“You therefore, my son, be strong in the grace that is in Christ Jesus.

And the things that you have heard from me among many witnesses, commit these to faithful men who will be able to teach others also. You therefore must endure hardship as a good soldier of Jesus Christ.

No one engaged in warfare entangles himself with the affairs of this life, that he may please him who enlisted him as a soldier.

And also if anyone competes in athletics, he is not crowned unless he competes according to the rules.” 2 Timothy 2:1-5 NKJV

THE TRUTHS IN THIS TEXT ARE DEEP BUT WE WILL UNCOVER ONLY THE LITTLE THAT WE CAN.

The first line of truth we can see here is this; God will not commit great kingdom treasures and visions to faithless men. Men may do so but God will never do so. Kingdom assets, assignments, visions and critical mandates are committed only t faithful men.

The next line of truth from our text is about what faithfulness calls for. It calls for not entangling oneself with the affairs of this life, and running the visionary life according to divine rules. The word says we will not be crowned with success by God’s faithfulness until that happens.

Faithfulness to GOD has been defined as the quality of remaining loyal, steadfast and true to God, despite adverse situations, or enticements and inducements. It is a major law of visionary living that can guarantee great success in life.

As we bring this to a close, understand the message of today. God’s faithfulness is not always enough to make us successful in visionary living. Our own faithfulness will be required. If you are not ready to be faithful to God, you will never see the fullness of His blessings in your life, no matter how much He commits Himself to you.

LET THIS SCRIPTURE BE AN ADDITIONAL MEDITATION FOR US TODAY!

“Moreover, brethren, I do not want you to be unaware that all our fathers were under the cloud, all passed through the sea, all were baptized into Moses in the cloud and in the sea,

But with most of them God was not well pleased, for their bodies were scattered in the wilderness.

Now these things became our examples, to the intent that we should not lust after evil things as they also lusted.

And do not become idolaters as were some of them. As it is written, “The people sat down to eat and drink, and rose up to play.”

Now all these things happened to them as examples, and they were written for our admonition, upon whom the ends of the ages have come. 1 Corinthians 10:1-11 NKJV