“But you have come to Mount Zion and to the city of the living God, the heavenly Jerusalem, to an innumerable company of angels, to the general assembly and church of the firstborn who are registered in heaven, to God the Judge of all, to the spirits of just men made perfect,

to Jesus the Mediator of the new covenant, and to the blood of sprinkling that speaks better things than that of Abel.” Hebrews 12:22-24 NKJV 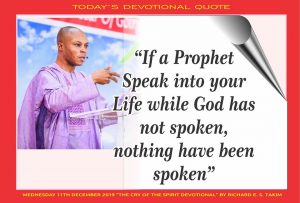 WELCOME TO THE 345th DAY OF OUR YEAR OF GOING FORWARD.

Whatever glorious you may have experienced in this life is cheap compare to a genuine salvation experience. That is what an unsaved president of any powerful nation in the world has not experienced.

It is an experience that places the poorest of the poor on a pedestal that even the richest man in the world cannot acquire with all his wealth.

It is a treasure that cannot be found on the richest places of the earth except if a saved person lives there. That is what separates between Sons of Light from sons of darkness. That is what makes a man joyful even when there is nothing to be excited about. It makes him supernatural.

Friend, the greatest encounter you can have on earth is a salvation encounter.

The mercy God released to us when we were all lost in sin is the reason for the salvation of those who believed in the gospel and accepted Jesus as LORD and savior. We never deserved it, but mercy came.

LIKE I HAVE ALWAYS SAID, MERCY IS SIMPLY NOT RECEIVING THE PUNISHMENT WE DESERVE

There are women who do not deserve a husband because of what they did with the loving ones God gave them.

Some on the planet today do not deserve year 2020 because of what they cooperated with the devil to do with their lives in 2019. They yielded to him and he used them to successfully perform his three-fold missions of killing, stealing, and destroying. But God say, “I will have mercy.”

He meant He will not give them what they deserve. He will forgive and grant them what they do not deserve – another year! Indeed, God decides who to go into a coming year in an outgoing year. If the decision is not favorable to anyone, he or she will either not cross into it or not go through it successfully. But such decisions are not all the time determined by the kind of life a person lived.

In the case of the righteous, they are determined by his divine destiny. That is why we do not look for long life after receiving eternal life. We just live if our divine destiny permits!

Our devotional text tells of the Blood of sprinkling that speaks better things than that of Abel that spoke in Genesis chapter 4. The first time I heard that I asked myself what the blood is of sprinkling really speaking. Now I know it is speaking mercy, among other things. The Bible says,

“To Jesus the Mediator of the new covenant, and to the blood of sprinkling that speaks better things than that of Abel.” Hebrew 12:24

THE BLOOD OF ABEL SPOKE VENGEANCE. AND THAT WAS JUSTIFIABLE BECAUSE CAIN NEVER REPENTED.

It’s not just the blood of Able, human blood is naturally designed to cry of vengeance once it is shed. This is what assassins and people involved in killings do not know. Every human blood cries out things even prayers cannot take care of as soon as it is spewed. God made it so according to Genesis chapter 9. He said for every man’s blood He will require a reckoning.

So, if you do not care about that you will bring so much woe upon your self in this life and the life to come. A generation that respects human blood will protect the sanctity of human lives and not reduce it to that of animals.

But the blood of Jesus is different. It speaks mercy today. And will keep speaking that until the Day of Judgment. In the Day of Judgment, it will no longer speak mercy but justice – which will mean final punishment to all unrepentant souls.

The blood of sprinkling is the blood Jesus that was sprinkled on the altar of GOD in Heaven the day of His resurrection.
It cancelled the consequence of my sin, and your sin and all the legal rights of the devil over us, and everything that may be speaking against us in the spirit realm. But this is only applicable to sins we repent of not sins we wickedly live in.

Paul, in his letter to the Colossian church, captured it this way;

“And you, being dead in your trespasses and the uncircumcision of your flesh, He has made alive together with Him, having forgiven you all trespasses,

having wiped out the handwriting of requirements that was against us, which was contrary to us. And He has taken it out of the way, having nailed it to the cross.

Having disarmed principalities and powers, He made a public spectacle of them, triumphing over them in it.” Colossians 2:13-15 NKJV

These are the scriptural revelations that make God’s Mercy the greatest utterance in Heaven and on earth. It is the only utterance that you need to be free from ancestral forces, evil foundations, generational curses etc. not the utterances of “sowing seeds.”

It is the only utterance you need to be free from whatever your fathers did, not taking prophets to your village or having them speak into your life. I remember making a statement some time back. I wrote saying;

IF PROPHETS SPEAK INTO YOUR LIFE AND GOD HAS NOT SPOKEN INTO IT, NOTHING HAS REALLY BEING SPOKEN. HENCE, YOU WILL STILL BE IN TROUBLE.

Ordinarily, when a prophet speaks into your life, He should be speaking into it what God has already spoken into it which he caught in the Spirit. But most “speak into your life” prophets today are alienated from God. Their greed for money and covetousness for people’s properties has separated them from Heaven’s throne where authentic prophetic utterances flow from. They now prophesy by Baal, greed and covetousness.

I don’t care who may be speaking into your life, if the blood of Jesus has not spoken into it nothing about you will change. Your past will keep killing your present and making sure you did not step into your future. And what makes the blood to speak into your life is not the financial seeds you sow or are told to sow (as good as that may be), neither is it your fast or prayer (as good as it may be) but your repentance.

If you confess your sins and wicked deeds to “the right ears” and deeply repent of them, it will activate the utterance of the blood in the Throne Room of God for you. GOD made it clear in His word that Mercy will be the utterance. And the instant the word “Mercy” comes out of the throne room, judgment will be erased leading to times of refreshing from the presence of the LORD! That is why the Bible says,

“Repent therefore and be converted, that your sins may be blotted out, so that times of refreshing may come from the presence of the Lord,” Acts 3:19-20 NKJV

We can go and on, but like I always say, this is a devotional.

LET THESE WORDS OF PROVERBS FURTHER GUIDE YOU. AS YOU EMBRACE THIS GLORIOUS DAY FROM THE LORD!

He who covers his sins will not prosper, but whoever confesses and forsakes them will have mercy. Proverbs 28:13 NKJV