“For there is born to you this day in the city of David a Savior, who is Christ the Lord. And this will be the sign to you: You will find a Babe wrapped in swaddling clothes, lying in a manger.”
And suddenly there was with the angel a multitude of the heavenly host praising God and saying: “Glory to God in the highest, and on earth peace, goodwill toward men!” Luke 2:11-14 NKJV 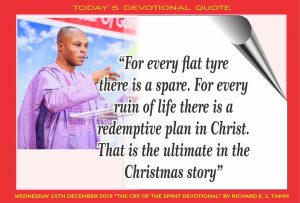 WELCOME TO THE 359th DAY OF OUR YEAR OF GOING FORWARD.

Merry Christmas to all my Face book friends especially those who usually take time to read and absorb what the LORD has been saying to us through the devotionals. And Merry Christmas to all members of the Cry of the Spirit Ministries GLOBAL. It is of the LORD’s mercies that we are not consumed. From one Christmas season to another, it has just been GOD.

Like every Christian home, we all started our Christmas as kids. Today most of us are adult, some with kids and others with even grand kids. It is good to be grateful to GOD for all that. Many people we know are no longer alive to see even a Christmas. Some are completely incapacitated. But we are here to say another Merry Christmas!

The celebration of Christmas is rooted in a pagan festival used to worship the god of misrule. But over the years some sons and daughters of the King have used it to wreak havoc in the kingdom of darkness and reap souls to heaven. I know great men of God in my country, Nigeria, we gave their lives to Christ on Christmas day. They were notorious sinners, but the net of the word caught them on Christmas day – the only day they decided to go to Church.

One thing about God is His great ability to turn what the devil have been using to kill, steal, and destroy into a redemptive tool. Christmas have become such a redemptive tool that a time came in the United States of America that the salutation “Merry Christmas” became almost forbidden in the white house. It took GOD using a Donald Trump to restore it back again.

And Like the angles sounded it the day Christ was indeed born, I want to say again this day that we erroneously believe to be the day of His birth, Glory to God in the Highest, and on earth peace, and goodwill toward men! The Coming of Christ to earth as man indeed brought eternal peace to us. It opened the doors of salvation to humanity.

Of course, Jesus was not born in December. The evil one started the December pagan feast that was later re branded and celebrated as Christmas. Now he is afraid of what he started. That is the Kingdom we belong. It is called the KINGDOM OF GOD. It is forcefully advancing, powered by the zeal of the LORD.

ISAIAH THE PROPHET PUTS IT THIS WAY;

“For unto us a Child is born, unto us a Son is given; And the government will be upon His shoulder. And His name will be called wonderful, Counselor, Mighty God, everlasting Father, Prince of Peace.

Of the increase of His government and peace there will be no end, upon the throne of David and over His kingdom, to order it and establish it with judgment and justice from that time forward, even forever. The zeal of the LORD of hosts will perform this.” Isaiah 9:6-7 NKJV

In my opinion we should not shay away from saying “Merry Christmas” and get the revelation buried in the first coming of Jesus as the LAMB now that the evil one has become afraid of it. Jesus came as a lamb that was why He was born by a woman He created and even helped to carry Him in the womb as a Baby. Like I have always said, “Mary did not carry Jesus in her womb. Jesus carried Marry in His hands all through.” It is a hidden mystery that only those with the Holy Spirit will comprehend.

Friend, the Christmas story is a great story! Like I said in one of our devotionals, it tells us of “Christ-Move-Against-Sin.”

To me the Christmas story is a redemptive story. It is the story of how God stepped into the human flesh as second Adam to redeem the first Adam with his offspring. And if you look at it from the view of original intent, you will realize that it is a story of how God picked Himself up again after His initial plan for mankind was disrupted. That shows us what we should always do under GOD whenever we suffer a setback. God suffered a set-back. That could be strange to some of us, but He did. Let me share with you how it happened!

God’s initial plan was to outsource Heaven to the earth through a creature in His own Image and Likeness, hence creating man. You need to read the book of Job to see how Heaven celebrated with great Joy when that happened.

Adam was GOD-Man on earth. And that progressed until the tempter came and beguile Even who later brought Adam down. That was it! Everything stopped, and God suffered a major setback.

I JUST SUMMARIZED A ONE-WEEK TEACHING IN FEW LINES!

God had to pick Himself up again by stretching forth His hands to His redemptive plan to correct the fall with the intend of continuing again. But let me backtrack a bit.

You see, when the Bible said “we do not have a High Priest who cannot sympathize with our weaknesses or infirmities” it is not a myth. There is nothing you are going through now that God has not gone through and is still going through. So, He can help! He understands perfectly.

If you say God does not know what it means to suffer losses, you lie. When fallen angels invaded and corrupted the earth, it was a big lose. When Lucifer became Satan, it was a big lost. When one-third of His angels decamped and became loyal to Lucifer, it was a great lose.

I can go on, and on. But what is important is how God picks Himself up again each time He suffer these things. That is why the word “redemption” is very important.

This Christmas day may be a day of regret for someone. It is not a sin to regret a thing because God Himself regretted for creating man. But in His regrets, He stretched forth His mind towards His redemptive plan. And Noah was that plan. There is someone, some ministers, some Church, some ministry, some book; some fellowship meeting that is part of God’s redemptive plan for your life the way Noah was to Him.

IT TAKES SENSITIVITY TO DISCOVER!

Here is what I mean; if you own a car, you will understand that a “spare tyre” is a redemption plan for a “flat tyre.” When a serving tyre goes flat, you do not sit down and lament over it. You just reach out to the spare and use it to replace the flat tyre. It is when you do not have a spare that things become awry.

In similar way, for everything that has gone flat in your life – marriage, finance, family, ministry, health, career, or spiritual life – there is a redemptive plan of God for it. Just reach out to God in prayers and ask Him to reveal it to you, and then use it as a recovery plan for your life from 2020. That is the greatest message of the Christmas story!

Our devotional text made it clear that as soon as God’s redemptive plan was born – Jesus the Christ – angels descended with song and praises to God. Then the shepherds, and finally the Wiseman with gifts! What is the message here?

If you will stretch through prayer into God’s redemptive plan for your trouble and lay hold on it, God will release angels to minister to you. Yes, they will do things that will change your story and the bad side of your life. Shepherds will also come; not self-serving ministers of God but those who will feed you to enter God’s redemptive plan revealed. Then destiny partners will invade your life with amazing favors like the Wise men did to Jesus after that – not terrible and crafty Church members.

My Christmas prayer for you is that you stumble into God’s redemptive plan for any area of your life that may have been wasted and ruined in Jesus precious name. Yes, may the LORD do something in your life using this devotional. I know, if you are sincere and hungry spiritually, you can dig a whole lot from this devotional.

NOW, IS IT POSSIBLE TO BE REDEEMED EVEN AFTER A BAD DIVORCE?

My life, Family, and ministry were badly ruined by people I knew early in ministry. That is why I have survived the current attacks from terrible and crafty church members who look so harmless but are very terrible. Older ladies you would think, these ones have grown up kids and are well educated behaving stupidly. Young people you pour so much love into thinking it will help them positioned for their march into destiny turning to little devils.

No ruin can stop our march into glorious destiny. I remember when I first faced these things in 2003, I was left for dead – naturally and spiritually. But in His mercy, God started speaking to me about the mystery of redemptive plans. Then the revelation started coming. Today I am at advanced stage of recovery. Yes, I say advanced stage because I know where I ought to be now. I am not yet there but I will get there.

You are the next on God’s list! Everything the enemy held back will be restored! Whatever is ruined in your life will be redeemed. The LORD will enable you to access His redemptive plan, in Jesus precious name.

Friend, as you celebrate this season, let these truths be your meditation! You can fan them into flames by spending time with the LORD in prayer today standing on the truths.

One Again, Merry Christmas and a glorious New Year!!!

‘Call to Me, and I will answer you, and show you great and mighty things, which you do not know.’ Jeremiah 33:3 NKJV