“Then Barnabas departed for Tarsus to seek Saul. And when he had found him, he brought him to Antioch. So it was that for a whole year they assembled with the church and taught a great many people. And the disciples were first called Christians in Antioch.” Acts 11:25-26 NKJV 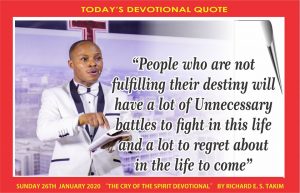 WELCOME TO THE 26th DAY OF OUR YEAR OF REJOICING

Sometimes I sit to thin about the fallen angels. The were given the power to live in the flesh just for a short time and they all fell and began to commit sexual acts and other terrible acts that gave birth to the Nephilim. That tells you how expensive it is to live in the flesh. That is why we are called to fight a constant battle against the flesh, always. People who win the battle against the flesh on daily basses will win every other battle of life.

We began the year 2020 with high expectations on God doing fearful things that He has promised us so that our destiny can be unleashed. We give Him the glory for all that because we can joyfully see the things His glorious hands are doing especially by speaking to us on daily bases.

It is something that needs to be given total attention because it serves like the storehouse of all God wants to do in our lives and all He intends that we become on this side and the other side of eternity.

For instance, everyone in hell fire right now has not fulfilled or is not fulfilling his or her divine destiny. They are only sharing in the eternal punishment of fallen angels because they refused God’s redemptive plan for their lives.

People go there simply because of their earthly choices; the choice not to accept Jesus Christ as LORD and savior.

Some of the greatest killers of divine destiny is man-made religion. Many who are trapped in man-made religions will not go to heaven. It’s as serious as that. Except they make Jesus their LORD and savior, they will never fulfill their divine destiny after death. They will share the eternal destiny of Satan who they served without knowing.

Christianity itself is not a religion but a pre-determined life of God for mankind – a life we can only live after a true encounter with Jesus Christ, KING of kings and LORD of lords.

They were men of Godliness, carrying Christ not on molded images and crucifixes but in their hearts; consequently, moving in the power and Spirit of the LORD converting the kingdoms of the ancient world into that of God and of His Christ.

In simply terms, they were men and women with fruitful and powerful relationship with Jesus Christ manifesting in unconditional commitment to His will, His way, and His life. Anything we are living that is short of this is not Christianity but a form of godliness that has no power.

THAT IS WHY TRUE CHRISTIANITY IS NOT A CHURCH THING.

True Christianity is a Kingdom thing – it is an extension of the Kingdom of God from Heaven to the earth through saved and sanctified men and women – it is a manifestation of Christ in our daily lives to a lost and dying world. Until our relationship with Jesus Christ manifest as that, we are not truly saved and therefore cannot fulfill our divine destiny.

A major highlight in our devotional text for today says “So it was that for a whole year they assembled with the church and taught a great many people. And the disciples were first called Christians in Antioch.”

What truth can we glean from this highlight?

If you have a little knowledge of Church History, you will realize that the Church at Antioch was an APOSTOLIC BREAKTHROUGH CENTER. That was where the pattern for true Church work was received from Heaven through the Prophets and Teachers that were there and established on earth.

I know some ignorant people will adopt this as the name of their Church. Please we should stop fooling ourselves. Apostolic Breakthrough Center is not the name of a Church but a description of what the spiritual CONTENT of a true Church does to a lost, dying or bruised soul.

SADLY, MOST CHURCHES ARE JUST CROWDS.

They are not Church yet hence instead of being centers of Kingdom Activities they are centers of demonic activities.
For instance, the Cry of the Spirit Ministries in Kenya was established by God to be an APOSTOLIC BREAKTHROUGH CENTER for East Africa. By His mercies God is using it to reach even people in other part of the world.

That is why the Believers, churches, pastors, Bishops etc. who drink from our fountain are growing in their personal relationship with God. What happened in Acts 11:25-27 is repeating itself among us. God is moving His people from religion to a more personal and deep relationship with Jesus Christ – something that is unconditional and very deep.

What is the message this morning? You can never fulfill your destiny without a personal relationship with Jesus Christ.
You may need a onetime encounter with God through a preacher to initiate that relationship, but you will need an APOSTOLIC BREAKTHROUGH CENTER to grow in it and come to the point where you unleash your destiny as a manifest Son of God; not just a Church member.

We can never fulfill our divine destinies as Church members. We can only fulfill them as Kingdom Citizens, and that begins with a heart preparation to follow Jesus until He make us what He wants us to be.

MAKE THIS SCRIPTURE AN ADDITIONAL MEDITATION FOR TODAY;

And Jesus, walking by the Sea of Galilee, saw two brothers, Simon called Peter, and Andrew his brother, casting a net into the sea; for they were fishermen. Then He said to them, “Follow Me, and I will make you fishers of men.” They immediately left their nets and followed Him.

Going on from there, He saw two other brothers, James the son of Zebedee, and John his brother, in the boat with Zebedee their father, mending their nets. He called them, and immediately they left the boat and their father, and followed Him. Matthew 4:18-22 NKJV