But when it pleased God, who separated me from my mother’s womb and called me through His grace, to reveal His Son in me, that I might preach Him among the Gentiles, I did not immediately confer with flesh and blood, nor did I go up to Jerusalem to those who were apostles before me; but I went to Arabia, and returned again to Damascus.” Galatians 1:15-17 NKJV 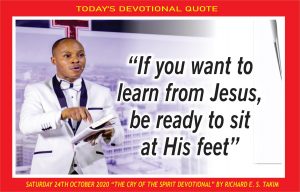 WELCOME TO THE 296th DAY OF OUR YEAR OF REJOICING

“I bless the LORD of Heaven and Earth for allowing us to see another day and begin another week today. I bless Him for schooling us in His ways even through this medium. His greatest desire for us all is that we be preserved for His Heavenly Kingdom. It’s been our month of “Schooling for Restoration.”

I have come to discover that one of the best places to sit in Christ Jesus is His feet. Yes, the Bible says,

we are highly seated together with Him in the Heavenly places, far about principalities and Powers (Ephesians 2:6).

But where did God design that we sit with Him at such height of dominion and power? On His Head? No! Sadly, many of us are trying to sit on His head. That is why we do not consult Him before doing anything in our Christian life.

Most of us don’t even take to heart what He says.

We are so rebellious and yet desiring that He blessed us. Rebellion is the easiest way to sit on the Head of Christ. When you Choose your way above His, you have sat on His head. When we live in sin, we have sat on His head and even Crucified Him afresh. The place God designed that we sit with Christ in our “walk” and “talk” with Him is not on His head, but at his feet.

WHERE CAN WE FIND THAT IN THE BIBLE? YOU MAY ASK.

We can find that in so many portions of scriptures but let’s limit ourselves to one. Jesus said in His word,

“All things have been delivered to Me by My Father, and no one knows the Son except the Father. Nor does anyone know the Father except the Son, and the one to whom the Son wills to reveal Him.

Come to Me, all you who labor and are heavy laden, and I will give you rest. Take My yoke upon you and learn from Me, for I am gentle and lowly in heart, and you will find rest for your souls. For My yoke is easy and My burden is light.” Matthew 11:27-30 NKJV

If you look at this scripture carefully, you will realize that it began with the issue of “knowing the Son (Christ) and Knowing GOD, the Father” (though if you know the Son, you have known God because He is God according to John 1:1-5). It is actually a scripture about the revelation of the Father to whoever the son wills to Reveal Him to, and the revelation of the Son to whoever the Father wills to reveal Him to.

When Jesus was physically on earth, the greatest move of Heaven was to reveal Him to the Jews supernaturally, that was why Heaven was speaking to them in signs, wonders, miracles and three times literally with an audible voice from Heaven.

But most of them could not catch the revelation.

One-day Peter caught it and said to Him,

“You are the Christ, the Son of the living God” (Matthew 16:16 NKJV) And Jesus responded and said to Him, “Blessed are you, Simon Bar-Jonah, for flesh and blood has not revealed this to you, but My Father who is in heaven….” (Matthew 16:17 NKJV)

If you read that scripture further its says

“Come to Me, all you who labor and are heavy laden, and I will give you rest. Take My yoke upon you and learn from Me, for I am gentle and lowly in heart, and you will find rest for your souls. For My yoke is easy and My burden is light.”

That is after He has spoken about knowing Him and knowing the Father!

It then means the Primary purpose of coming to Jesus is to “Have Him and the Father revealed to us through learning or schooling.” He said,

“take my yoke upon you and learn of me, for I am gentle and lowly in heart and you will find rest for your souls.”

The yoke is light, not just as in weight but as in illumination or revelation.

THE RESULT OF ALL THAT WILL BE REST FOR OUR SOULS! HALLELUJAH!

Salvation is really a call to come and be schooled in the things of God; it is a call to be schooled for restoration because the place of REST was where Adam lived in the Garden, and God wants us restored to that place now in the Spirit and then literally after the consummation of all things.

From Matthew 11:27-30 therefore, it’s clear that the place God designed that we sit with Christ in the Heavenly places is the place of His feet. The Bible made it clear that “the feet” prophetically is the place of submission, obedience and schooling or Learning. If you want to learn from Jesus, you must be ready to sit at His feet spiritually. That is the only place the Father can be revealed to you. Paul explained this to us when he said to his audience at one time,

“I am indeed a Jew, born in Tarsus of Cilicia, but brought up in this city at the feet of Gamaliel, taught according to the strictness of our fathers’ law, and was zealous toward God as you all are today.” Acts 22:3 NKJV

He sat at the feet, not the head of Gamaliel.

Gamaliel was a notable teacher of the Torah. Paul sat at his feet to be taught the ways of God. But the result was not rest but a life of terrorism. He was going about killing Christians as a result. But when Jesus arrested Him personally and he responded by sitting at “His feet,” He entered into REST and became the only authentic apostle of Grace.

That brings us to our devotional text for the day. He will latter write to the Church at Galatia and said,

“But when it pleased God, who separated me from my mother’s womb and called me through His grace, to reveal His Son in me, that I might preach Him among the Gentiles, I did not immediately confer with flesh and blood, nor did I go up to Jerusalem to those who were apostles before me; but I went to Arabia, and returned again to Damascus.”

PAUL DID NOT GO TO ARABIA FOR TOURISM

What did he go to Arabia to do? He went there to sit at the feet of Jesus and be taught or schooled by revelation about the Father, His law to Moses, about the Son His grace to mankind, how He came to fulfill the law and all about the Christian life that we are called to live. He went there to be taught the things of GOD. He did not go there for tourism.

You see, if you will choose to spend the rest of your days schooling at the feet of Christ, directly or indirectly through His apostle and prophets, there are no words to describe what you become in the kingdom.

Whatever Paul the apostle became in the Kingdom is a pointer to what you can become. He wrote books that God made part of the Bible and they have helped us so much in improving our walk and talk with God. God will make you a light to the gentiles if you make the place of His feet your residence.

Sitting at His feet does not just make you a “vessel of light” to those in darkness, it also changes your conversation in the Spirit.

That is why you find people who sit at the feet of Jesus not talking about the devil or their enemies but matters of the Kingdom. But those who don’t (both pastors and their members) talk about Satan – his evil spirits and all that he does to the extreme.

I believe God is saying to us, “It’s time to depopulate Churches and withdraw support for ministries that are schooling people in the things of the devil” because they are defeating the purpose of our salvation. The devil did not save anybody, why talking about him and his fallen angels?

Friend, what is the message of our devotional this morning?

There is a call of God on all of us to come sit at the feet of Jesus to learn of Him so that He and the FATHER can be revealed to us. Until you start responding to that call, your enemies and all they do will remain a thing of concern in your life.

The wisdom of God this day demands that you take your seat at the feet of Christ by joining Churches that will help you do and not by His side (He is not your equal) or on His head. The reason is simple.

The first thing that salvation demands that we do when we come to Christ is learn of Him. Until you respond positively to that in your “walk” and “talk” with GOD, your life will remain in a negative mode.

Let he that has an ear hear what the Cry of the Spirit is saying!

“Many people shall come and say, “Come, and let us go up to the mountain of the Lord, to the house of the God of Jacob; He will teach us His ways, and we shall walk in His paths.” For out of Zion shall go forth the law, and the word of the Lord from Jerusalem.

He shall judge between the nations, and rebuke many people; they shall beat their swords into plowshares, and their spears into pruning hooks; Nation shall not lift up sword against nation, neither shall they learn war anymore.” Isaiah 2:3-4 NKJV