Then Moses and the children of Israel sang this song to the Lord, and spoke, saying: “I will sing to the Lord, For He has triumphed gloriously! The horse and its rider He has thrown into the sea! 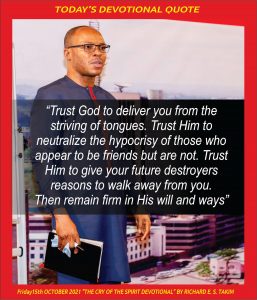 WELCOME TO THE 288TH DAY OF OUR YEAR OF HIGHER HEIGHTS!

God has been so mindful of us. Can I have a witness? Yes, because He has been mindful of us, that is why we are alive today. We can feel the breeze, feel our lungs, for some, hear the birds sing, the goats bleat, the cows mow, and the cooks crow.

We are alive because Jesus is alive! Even if you are going through anything, He has not allowed that thing to consume you.

Sometimes we sleep in pains emanating from disappointments, and then wake up not feeling to even go on with life. But God’s mercy has miraculously been seeing us through. It has been igniting hope in our hearts.

The Bible spoke about Paul going through the perils of false brethren. That has been the territory of some of us for many years. The kind of falsehood that thrive among Church members and wickedness that lives in their hearts is alarming.

The pew is as rotten as the pulpit in many cases. Most ministers of the gospel became what they are today because some wicked Church members killed what God gave them for their generation and turned them into wicked men with no compassion for the suffering.

This has nothing to do with the shocking adultery blame on doors and innocent church members on the media by some ‘Church leaders.’ This is about Church members who are capable of making one insensitive to people’ plight due to their wicked hearts.

It’s about people who can submit to the devil to sway them to do things that are capable of knocking out love for our neighbors, deep concern for people and genuine commitment to the work of God from the heart of God’s servants both behind the pulpit and on the pew.

I HAVE FACED THIS KIND OF ATTACKS ALL MY MINISTRY LIFE, AND STILL FACE. I GUESS SOME OF YOU READING THIS TOO.

You may be a minister of the gospel who is going through similar things; I want you to take a word from this devotional. And if you are a Church member reading this, I want you to make up your mind not to be a weapon of love demolition in the hands of the enemy – Don’ be another Judas Iscariot or false follower in the ministry of your man of God, you will end up knocking out deep and genuine concern for people from his heart.

God will judge everyone for their actions. If it did not end well with Judas Iscariot, it will not end well with you. None can explain the pain you go through in the hands of someone you knelt down before GOD and asked the LORD to blessed; who later becomes a tool in the hand of the wicked to destroy.

Can you imagine spending hours in fasting and prayers for a people you did not know will become your killers at a later date? Can you imagine sheltering someone who will not be compassionate towards you when you will need help?

Can you imagine going out of your way to pull people out of the fire; other people’s kids who will never be concerned for your own kids when they will be needing help? When someone yields to the flesh or the devil to do things that hurt, especially those walking in love towards them, God will not forsake the righteous neither will He justify the wicked.

One thing the devil does to stop a work that is pulling men from the fires of hell is to sway those who should be building to start destroying. It is part of the warfare he musters against us! But the good news about spiritual warfare is that God’s people do not fight from a place of defeat, we fight from the place of victory.

We are not trying to initiate a fresh thing on the face of the earth; we are unleashing what God has already finished in His redemptive plans. That is why it will never fail.

God finishes before He starts. He will finish a thing in Heaven before coming to ask you to start it here on earth. That is why no matter what the devil does, His work does not fail or come to an end. It has a way of going forward surprisingly during and after a season of satanic assaults. Sometime God does it in such a way that you cannot even trace if there was an assault from hell. That was how I lived under a satanic assault for over 10 years without those I was leading knowing about it.

A MAJOR HIGHLIGHT IN OUR DEVOTIONAL TEXT THIS MORNING SAYS;

I want to encourage someone to align with this scripture.

I do not think our Man of War will ever lose a war, so cling to His warfare tactics and believe in His ability to fight your battles and defeat the wicked one; perhaps even save those the enemy may be using at this time against you.

Trust Him to deliver you from the striving of the tongues of men. Trust Him to neutralize the hypocrisy of those who appear to be friends but are indeed enemies. Trust Him to give them a reason to walk away from your life. Trust Him to employ all His weapons of war to save you in your trying.

I will trust Him to look into His warfare chess and deploy the very angels I need at this time of my life. I will be still and know that He is God!

I know He will not give you over to the will of your enemies because He has never done that to His faithful ones. I know the enemy shall not outwit you in battle nor the sons of wickedness afflict you because God has never let that happen to His covenant ones. I know He will plague those that hate you and beat down your foes before your face.

I know when all these will be over, when we will cross the river, in the sweet by and by, we will sit before fellow soldiers of the cross and tell the stories of how this Man of War enabled us to execute our assignment and do His blessed will, and how He grated us victories over the enemy and over those He swayed against us.

Let us look forward to the reward and keep doing what we know to be His blessed will, trusting Him to watch over our souls and the souls of those who are truly for us. But the lamp of those being swayed to defeat His purposes in our lives, the Bible says, will be put out in darkness.

WHAT AM I SAYING THIS MORNING?

God has never lost a war; whatever you may be going through will not be the first. But if you are part of a kingdom assignment, if you are being used of the LORD under a persecuted apostolic mantle to save people from the fires of hell, let these words of Jude be your guide.

“But you, beloved, building yourselves up on your most holy faith, praying in the Holy Spirit, keep yourselves in the love of God, looking for the mercy of our Lord Jesus Christ unto eternal life.”

“And on some have compassion, making a distinction; but others save with fear, pulling them out of the fire, hating even the garment defiled by the flesh.” Jude 20-24 NKJV