“And the Lord said to Moses, Say to Aaron and his sons, This is the way you shall bless the Israelites. Say to them,

The Lord bless you and watch, guard, and keep you; The Lord make His face to shine upon and enlighten you and be gracious (kind, merciful, and giving favor) to you; The Lord lift up His [approving] countenance upon you and give you peace (tranquility of heart and life continually).

And they shall put My name upon the Israelites, and I will bless them. 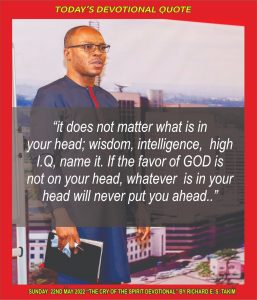 WELCOME TO THE 142ND DAY OF OUR YEAR OF AMAZING GRACE

This is the day the LORD has made, we shall rejoice and be glad in it. The LORD God has commanded His faithfulness towards us again, and another day is the result. Indeed, happiness is to know our savior, and living a life within His favor.

It does not matter how skilled or gifted you are, one the LORD surrounds with His favor, can still succeed over you. Our lives have not been trapped in the fist of our enemies because the LORD has favored us. Where the enemy wanted tears, GOD has given us joy.

His favor has been our back up all these years. To Him belong the glory!

Your throne, O God, is forever and ever; A scepter of righteousness is the scepter of Your kingdom.

You love righteousness and hate wickedness; Therefore God, Your God, has anointed You With the oil of gladness more than Your companions.” Psalm 45:6-7 NKJV

We are not lifted because we are superior to them in gifting, education, skill or training. By virtue of any of that, you are at the same level.

THOUGH WE LOVE RIGHTEOUSNESS AND HATE WICKEDNESS, WE ARE LIFTED BECAUSE YOU ARE FAVORED.

The story of the parable of the worker in the Bible will help us understand something about how GOD favor people. The story, in my view this morning, has a deeper meaning but I want us to look at it in the light of the Cry of the Holy Spirit this morning on divine favor. The text said;

“For the kingdom of heaven is like a landowner who went out early in the morning to hire laborers for his vineyard.

Now when he had agreed with the laborers for a denarius a day, he sent them into his vineyard.

And about the eleventh hour he went out and found others standing [a]idle, and said to them, ‘Why have you been standing here idle all day? ’They said to him, ‘Because no one hired us.’ He said to them, ‘You also go into the vineyard, ]and whatever is right you will receive.’

“So when evening had come, the owner of the vineyard said to his steward, ‘Call the laborers and give them their wages, beginning with the last to the first.’

And when those came who were hired about the eleventh hour, they each received a denarius. But when the first came, they supposed that they would receive more; and they likewise received each a denarius.

And when they had received it, they complained against the landowner, saying, ‘These last men have worked only one hour, and you made them equal to us who have borne the burden and the heat of the day.’

But he answered one of them and said, ‘Friend, I am doing you no wrong. Did you not agree with me for a denarius? Take what is yours and go your way. I wish to give to this last man the same as to you” Matthew 20:1-14 NKJV

IN THIS SCRIPTURE, YOU FIND THE LORD, DEPICTED IN THE STORY AS THE LAND OWNER.

He employed everyone for the same pay but at different times of the day. It is like all Joined the Church at the same season; or joined a work place on same qualifications. We find some employed by the land owner in the morning at dawn, and agreed with him for a denarius a day.

Then he found some on the third hour of the day, specifically 9am, and employed them and decided to give them whatever is right in His sight.

The only difference here is He did not agree with them on anything. They just yielded to His will. Then he found some on the 6th hour, which is 3pm and employed them, and some on the 11th hour and employed them still. The first set came at dawn, that is 6am. The next on the third hour, 9am. The next on the 6th hour, 3pm. And then the last set was employed on the 11th hour, 5pm.

Then came the time for payment. While the first people He found got what they agreed with Him, the last three sets He found, got what His favor decided to give them. They got the wage of an entire day in the very limited hours they had worked.

That is how God’s favor work. It gives you the wages of a life time for just an hour of problems solved. Then you spend the rest of your life to keep the blessing flowing.

Favor comes when God caused His face to shine upon us. It happens when God single you out for a special miracle, blessing or covenant relationship with Him. The Priestly prayer in the Bible is what we captured in our devotional text. It says,

“The Lord bless you and watch, guard, and keep you; The Lord make His face to shine upon and enlighten you and be gracious (kind, merciful, and giving favor) to you; The Lord lift up His [approving] countenance upon you and give you peace (tranquility of heart and life continually).” Numbers 6:24-26 AMPC

The last three sets of workers who got what they never qualified for, especially those who acme in the 11th hour, saw this scripture manifesting in their lives. The LORD caused His face to shine upon them. The LORD just favored them. And those who got what they agreed with Him, protested.

THE CLASSICAL EDITION OF THE AMPLIFIED VERSION, PUT WHAT THEY SAID LIKE THIS;

“Now when the first came, they supposed they would get more, but each of them also received a denarius. And when they received it, they grumbled at the owner of the estate,

Saying, These [men] who came last worked no more than an hour, and yet you have made them rank with us who have borne the burden and the [c]scorching heat of the day.

But he answered one of them, Friend, I am doing you no injustice. Did you not agree with me for a denarius? Take what belongs to you and go. I choose to give to this man hired last the same as I give to you.

Am I not permitted to do what I choose with what is mine? [Or do you begrudge my being generous?] Is your eye evil because I am good? So those who [now] are last will be first [then], and those who [now] are first will be last [then]. For many are called, but few chosen. Matthew 20:10-16 AMPC

This protest tells us God’s favor upon our life can stir up protest in the camp of both our enemies and friends. The protest comes in different formats. So, if you are asking for God’s favor, be ready for anything, even from those you have done no wrong to and prepare your heart to forgive them even before they begin to do what they may do to you.

In fact, you may be treating people as your friends until God begin to favor you. That is when you will know they never liked you. The protest they will put up in form of change of attitude towards you.

Not everyone can take it when we are favored by the LORD, that is why it has a way of revealing a lot of things about the people around you.

Today, the world is preparing for another world cup. But I believe the best footballers in the world, are hidden someone unknown to everyone. The best doctors, pilots, surgeons, teachers, students, political leaders, journalist, authors and etc. are out there, still unknown to anyone.

ONE ACT OF DIVINE FAVOR CAN DO IN A PERSON’S LIFE WHAT A LIFE TIME OF LABOR CAN NEVER DO.

When the favor of the LORD is upon your life, it does not matter what may be against your life. Even Jesus, needed favor to be what He came to be on earth. The Bible says He increased in stature and in wisdom and favor with God and men. The classic edition of the amplified version puts it this way;

“And He went down with them and came to Nazareth and was [habitually] obedient to them; and his mother kept and closely and persistently guarded all these things in her heart.

And Jesus increased in wisdom (in broad and full understanding) and in stature and years, and in favour with God and man. Luke 2:52-52 AMPC

If you look at this scripture, you will realize that what preceded the favor He got was submission to set authority. Divine favor comes when we submit to God’s delegated or sovereign authority. The last three set of workers in the vineyard did not discuss what to be paid. They just submitted to the authority of the landowner to determine what they would be paid. That was why they got what they got.

If you want to be favored by God then be ready to do His will and follow His ways not yours. Because no matter how anointed, accurate in God or powerful you are, if you lack GOD’s favor on your life, you will never amount to anything in life.

As we bring this to a close, I want to submit that there are people who do not know how to walk in divine favor and enjoy every bit of it because of how much they have suffered in life. To them, favor is treated with suspicion and ingratitude because of the silly feeling of self-sufficiency.

If you are that way you will ruin your favor. You will develop attitudes that will treat God’s agents of favor badly and end up destroying God’s program for your life. You will need divine favor to cloth you as you lead a practical Christian life.

“My son, forget not my law; but let thine heart keep my commandments: For length of days, and long life, and peace, shall they add to thee.

Let not mercy and truth forsake thee: bind them about thy neck; write them upon the table of thine heart: So shalt thou find favour and good understanding in the sight of God and man.

Trust in the LORD with all thine heart; and lean not unto thine own understanding. In all thy ways acknowledge him, and he shall direct thy paths.

Be not wise in thine own eyes: fear the LORD, and depart from evil. It shall be health to thy navel, and marrow to thy bones. Proverbs 3:1-8 KJV