“Blow ye the trumpet in Zion, and sound an alarm in my holy mountain: let all the inhabitants of the land tremble: for the day of the LORD cometh, for it is nigh at hand;

A day of darkness and of gloominess, a day of clouds and of thick darkness, as the morning spread upon the mountains:

a great people and a strong; there hath not been ever the like, neither shall be any more after it, even to the years of many generations.” Joel 2:1-2 KJV 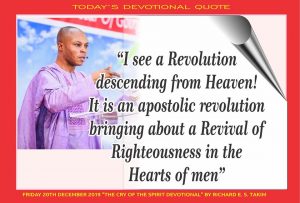 WELCOME TO THE 354th DAY OF OUR YEAR OF GOING FORWARD.

Its been 354 days of GOD’s mercies, faithfulness, and marvelous kindness. It will be very unfair not to acknowledge that irrespective of the circumstances we may find ourselves.

There are so many written wills of GOD, and one of it reads;

“In everything give thanks: for this is the will of God in Christ Jesus concerning you.” (1 Thessalonians 5:18 KJV)

The year may not have gone the way you expected it, but the will of GOD for every of His child is that we give HIM thanks. In seasons like this, many of us are good at making judgment based on our limited and most times carnal senses and coming up with complains instead of songs of joy.

When we allow our limited and carnal senses tell us how the year have been, we will find ourselves in a self-pity box, with no desire to appreciate GOD. We forget that many started the year more alive than us, but they are dead today.

Our generation must learn this simply truth; one of the major postures to take in the twilight of an outgoing year is the posture of gratitude. We must be ready to appreciate GOD for His marvelous acts and glorious deeds in our lives. Indeed, He has not dealt with us according to our sins but according to His faithfulness. We owe Him thanks!

But there is something happening in the heavenlies because of the pressure coming from the realm of GOD’s glory – something we must all get ready for.

The year 2020 will usher in a dimension of it in a way that the elects have not seen before. Ancient devils are being mobilized by hell to use the carnal Christians planted around the purposes of God to either derail the purposes or cut them short altogether.

The sincere ones will even weep if they find out they are being used to bring down GOD’s purposes. I see it coming, yes it has been determined. This is a wake-up call to all Christians to begin to desire the Holy Ghost and walk intimately with Him. It is a call to cease being carnally minded.

Friend, the truth remains to be carnally minded is dead. A carnal Christian is a more effective tool in the hand of the enemy than even an unbeliever. The reason is because we treat them as saved and spirit filled and give them a pass to be even in places where they ought not to be.

WE GIVE THEM POSITIONS THAT OUGHT TO BE GIVEN TO THE SPIRITUAL MINDED HENCE GIVING THE DEVIL THE CHANCE TO USE THEM AND BLOW US FROM WITHIN.

As I think about the necessity of apostolic impact, two things come to mind. First is the group of souls that accepted the gospel of the Kingdom preached by Phillip in Acts 8.

They got evangelistic impact by the ministry of Phillip. If they had been left that way, they would have grown to become terrible carnal Christians. Hence, becoming a willing tool in the hands the very devils that once held them captive by the ministry of the sorcerer who was also among them.

But the apostles in Jerusalem knew it was dangerous to leave them that way hence coming to release an apostolic impact in their lives. The Bible says;

“Now when the apostles which were at Jerusalem heard that Samaria had received the word of God, they sent unto them Peter and John:

Who, when they were come down, prayed for them, that they might receive the Holy Ghost:
(For as yet he was fallen upon none of them: only they were baptized in the name of the Lord Jesus.) Then laid they their hands on them, and they received the Holy Ghost.” Acts 8:14-17 KJV

The journey out of a life of carnality begins with receiving and retaining the Holy Spirit. A Christian life that has not received the Holy Ghost is a dead Christian life. That was the spiritual state of the people until Peter came.

When people submit their hearts to genuine apostolic impact, they move from being carnal Christians to becoming Holy Spirit controlled Christians, with the fragrance of Holiness oozing out of their lives. That is the trumpet to blow in Zion today. That is the prophetic alarm to sound on God present day Holy Mountain – the end time Church. That is the trumpet that will get us ready for the final Trumpet of the LORD.

A major part of our devotional says;

“Blow ye the trumpet in Zion, and sound an alarm in my holy mountain: let all the inhabitants of the land tremble: for the day of the LORD cometh, for it is nigh at hand;

LET’S TAKE A GAZE AT THE PHRASE “APOSTOLIC IMPACT”

In the kingdom of God, words, and phrases matter. They determine life and death. Word and phrases control so many things in the KINGDOM because they are the conveyors of Heavenly things from the throne of God to the throne of our hearts.

The phrase apostolic impact carries a lot for our generation. The Bible says,

“And God has appointed these in the church: first apostles, second prophets, third teachers, after that miracles, then gifts of healings, helps, administrations, varieties of tongues.” 1 Corinthians 12:28 NKJV

God appoints apostle first in Church because of the need for apostolic impact in a man’s journey with GOD. But let us demystify this phrase starting with the word APOSTOLIC.

With these definitions, one thing is clear. An apostolic impact will conform us to the teachings of the early Church or the New Testament without divorcing us from the spirit and letters of the Old. And that can only happen if we receive and retain the Holy Spirit in our lives.

WHAT COULD BE RESPONSIBLE FOR THIS?

The many false apostles and prophets dishing out false teachings are responsible. That brings me to a major truth about the apostolic today.

You see, there are three types of apostles in scriptures. We have THE 12 ORIGINAL APOSTLES OF THE LAMB found in Acts 12:12-23. Then we have ASCENSION APOSTLES Like Paul, and then FALSE APOSTLES (exposed in 2 Corinthians 11).

God began apostolic impact with the 12 original apostles and continued it with every ascension apostle in every generation from Paul to the ones in our days. Am referring to apostles by content not by titles.

In your quest for apostolic impact, you must understand one basic truth. And that truth is, you will never get a true apostolic impact by the hand of a false apostle no matter how you accept them. False apostles are title crazy and ego driven. Their god is their belly.

Paul calls them enemies of the Cross because their ministries do not lead people to the crucified life. It leads them to a form of godliness without power.

False apostles are the catalyst of apostasy. What is apostasy? It is a renunciation or departure from the faith. The Bible says in the later days many will depart from (not deny) the faith, giving heed to seducing spirits. It is happening already under the ministries of these false men of God.

Friend, there is a dangerous departure from the faith that was once delivered to the saints today, giving rise to a false Christianity – a Christianity that is not in conformity with the teachings of the early Church or the New Testament.

A Christianity that tells you sex before marriage is okay. Lies are no longer lies but wisdom, and all that. A version of Christianity that calls rebuke for sins judgment and convictions of the Spirit condemnation.

THERE IS NO TRUE APOSTOLIC IMPACT IN CHURCH TODAY BECAUSE THERE ARE VERY FEW APOSTLES BY CONTENT.

We just have so many apostles by title. That is why you find crafty preachers using the term Apostolic INVASION and all Kinds of APOSTOLIC conjectures to hide their nakedness. Christianity without true apostolic impact will give birth to apostasy or a departure from the faith.

We are seeing people in the Pentecostal and charismatic circles today departing from the teachings of the New Testament.

Sound doctrines on Holiness, repentance, revival, a grace balanced with truth, the Holy Spirit, His holy word etc. are now missing in the hearts of most present-day Churches. There is no true move of the Spirit today.

I see a lot of dead local churches that are products of evangelistic ministries screaming revival. But there is nothing to Revive about the evangelistic movement. We have had enough. We need an apostolic revolution – a radical Holy Ghost Change. If we say we need revival, then it is the Revival of righteousness that we need. And only an apostolic revolution can bring it.

I believe strongly that there is someone reading this that has had many impacts in life but has not had apostolic impact. That is why his or her life is far from being fulfilled.

If apostolic impact is missing in your life, you will be unfruitful in your walk with God, leading to a disorderly Christian life, wrecked by persistent sin and powerlessness in the spirit.

As you pass through this day, make up your mind to start seeking apostolic impact in your Christian life. Come under apostolic and prophetic fathering. It will give you rest from the days of adversity and deliver you from the horrors of the last days!

“Then many false prophets will rise up and deceive many. And because lawlessness will abound, the love of many will grow cold. But he who endures to the end shall be saved.” Matt 24:11-14 NKJV