“Surely the coastlands shall wait for Me; and the ships of Tarshish will come first, to bring your sons from afar, their silver and their gold with them, to the name of the Lord your God, and to the Holy One of Israel, because He has glorified you.” Isaiah 60:8-9 NKJV 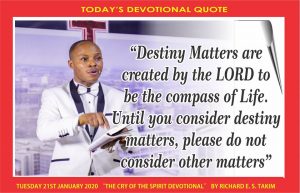 WELCOME TO THE 21ST DAY OF OUR YEAR OF REJOICING

We have flown on the wings of God’s mercies, compassion and faithfulness to arrive at this day. We are a unique generation. I remember a generation that was born when God wanted to show to the world that we are trapped in spiritual slavery. That generation was the generation of the sons of Jacob who spent hundreds of years in Egyptian slavery.

They were born into a slavery system and grew up seeing it as a way of life. If they had any chance to be Educated, courses on becoming a successful slave must have been the discipline they pursued; graduating with maybe first-class degrees on slavery because that was what their world was shaped to be.

But in the fullness of time God raised a man in the person of Moses to stand before Him and enforce their freedom from Egypt and her gods. Today we can glean some truths from their experience and know that everything was part of God’s big redemptive plan for mankind.

In a prophetic sense, that generation was God’s missionary team to Egypt, born to slave and die so that the world will be made to know that we are all slaves to sin and Satan and needs a savior in the person of Jesus Christ to be liberated and set free forever.

EVERY GENERATION OF GOD’S PEOPLE WILL HAVE ITS OWN DIVINE DESTINY TO FULFILL.

It will have its own part to play in God’s big redemptive plans for mankind. A generation that cannot sense its part and submit to it will end up becoming a wasted generation in God’s view.

Every day of our lives on earth ought to be a day of fulfilling Divine Destiny. That is why a daily talk on matters of destiny is necessary in life. As you go through your private walk and talk with God this year and the years to come SEEK Him daily to speak to you on destiny matters. Stop bothering Him on marriage or money matters. If He speaks to you on Destiny matters, He will unfold marriage and money matters to you as the conversation continues.

Destiny matters are designed by God to function as the compass of life.

God designed matters of divine destiny to form the core of human life because destiny was the primary purpose Adam was created. In other words, God created Adam to fulfill a divine destiny – He was created to extend Heaven’s rule to the earth through worship.

Divine destiny was therefore behind our existence, so when we make it of no importance in our lives, we pierce ourselves with many sorrows.

A major highlight in our devotional text today is unique and revealing at the same rime. It sounded like a question ad observer asked in amazement. It says:

To me, there seems to be an insinuation here that God, perhaps, has aircrafts in the Spirit. You know everything good that man created to make life easy came by divine enablement. From the discovery or invention of electricity to whatever good you can think of.

Maybe birds were created as part of the revelation that God rides on a powerful aircraft sometimes. David seems to have seen it in one of his devotional times and wrote down something like that in Psalm 18.

If that is true, then God’s aircraft will not be a non-living thing. It will be a living thing – something that is powered by God’s supernatural life instead of man-made engines. Any way; please, don’t mind me and my wild imagination about God! That is how I think sometimes!!

Let’s go to the subject of our devotional word for the day.

YOU GAIN ALTITUDE IN LIFE WHENEVER YOU COME INTO THE REVELATION OF YOUR DIVINE DESTINY. You maintain altitude in life when you stay in constant touch with that revelation. And the day you lose touch with it and keep moving on with life, you will one day crash land – sometimes without remedy.

That was what the life of Samson depicted. His divine destiny was to be a Nazirite unto GOD and use that position to unleash the supernatural power of God that was needed to deliver Israel from the hands of the philistines.

The philistines were not ordinary people.

They were men and women who have been empowered by the forces of darkness to supernaturally engage in any kind of natural warfare and defeat their enemies. No military might was able to conquer them naturally. That was why God raised the man Samson.

When he was in constant touch with matters of his divine destiny, he was flying high from one cloud of victory to another cloud of victory. I guess, like our devotional asked, some onlookers may have asked “who is this man that is flying with such an amazing altitude?”

Friend, it was a man in constant touch with matters of his divine destiny. He pulled down gates and did so many wonders. You can become this kind of person today.

If you are in constant touch with matters of your destiny, you will be able to fly high above principalities and powers. You will be riding over dominions and realms of darkness with ease. You will be seeing the glory of God making you a wonder before the world. But like Samson would later do, if you lose touch with them, you will begin to come down, and down, and down, until you crash land without remedy sometimes.

Samson lost touch with them, had his hair shaved and consecration deleted and lost his altitude in the Spirit. He ended up a prisoner in the camp of his enemies.

MAY WE NOT BE THE NEXT

For him, God’s mercy showed up again. Hallelujah!

He repented and his consecration was restored. Then with the little altitude he recovered after the experience he was able to kill more of God’s enemies in his death than he ever killed while alive. It was a short life that did not FINISH WELL but God helped him to FINISH STRONG.

What is the message this morning? Do not loose touch with matters of your divine destiny. Fix your gaze on them. That is the will of God for your life. If you loose touch with them, you will begin to commit sin instead of committing God and moving from filth to FILTH instead of faith to FAITH.
God said to Habakkuk;

..”Write the vision and make it plain on tablets, that he may run who reads it.

For the vision is yet for an appointed time; but at the end it will speak, and it will not lie. Though it tarries, wait for it; because it will surely come, It will not tarry. Habakkuk 2:2-3 NKJV

God is saying the same and even more to you this glorious day. He is saying to you “Consult matters of your divine destiny from time to time like the pilot does the control tower. Write them down, fill your mind with them and run with them.”

He is saying to you “do not allow the noise of the perils of this life; the lust of the flesh, the pride of life, the deceitfulness of riches, or the cares of this world to rob you of the spiritual altitude you need to gain in other to unleash your divine destiny.”

If you make this word from the LORD your meditation, your life will never remain the same. The Bible made it clear that hell will hate and recent you, but people will celebrate you; all at the same time. Another highlight in our devotional text also says:
“the coastlands shall wait for you; and the ships of Tarshish will come first, to bring your sons from afar, their silver and their gold with them, to the name of the Lord your God, and to the Holy One of Israel, because He has glorified you.”

In other words, you shall not be poor! You are a blessing. You only need to stay in constant touch with these eternal words today and become what God has destined you to be. God bless you!!

MAKE THIS SCRIPTURE AN ADDITIONAL MEDIATTION FOR THE DAY:

“The sun shall no longer be your light by day, Nor for brightness shall the moon give light to you; But the LORD will be to you an everlasting light, and your God your glory.

Your sun shall no longer go down, Nor shall your moon withdraw itself; For the LORD will be your everlasting light, and the days of your mourning shall be ended.

Also your people shall all be righteous; they shall inherit the land forever,

The branch of My planting, the work of My hands, that I may be glorified. A little one shall become a thousand, and a small one a strong nation. I, the LORD, will hasten it in its time.” Isaiah 60:19-22 NKJV