Out of the depths I have cried to You, O LORD; Lord, hear my voice! Let Your ears be attentive To the voice of my supplications.

If You, LORD, should [a]mark iniquities, O Lord, who could stand? But there is forgiveness with You, That You may be feared. Psalm 130:1-4 NKJV 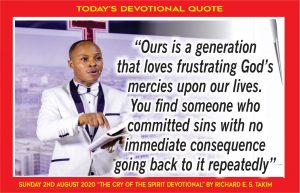 WELCOME TO THE 213TH DAY OF OUR YEAR OF REJOICING

There is a group that specializes in frustrating the mercy of God. There is also a another that God calls “vessels of wrath.” These two are a generation of those who do not know how to respond positively to God’s mercy. They see it as a right instead of a seed. They do not make use of it to turn from wicked ways and do the right things.

If you do not know how to respond to the mercy of God you will frustrate any covenant of God in your life, hence not coming out of terrible captivities that requires nothing but the covenant to come out of.

Yes, there are problems that we can never come out of except the LORD brings the covenant our ways.

I have come to discover that most evil forces holding families down, used their ignorance of GOD, and lack of relationship with the LORD to bring them into covenants with evil spirits, resulting in problems that even their prayers has not solved. Spiritual problems that steams from this kind of causes can only be broken by the covenant.

When you are caught up in this kind of captivity and you pray, GOD will answer you by bringing you into a covenant with Him. That is why you must respond to the mercy of God properly and not frustrate it.

When the LORD brings a covenant our way, it is an act of mercy. This morning I want us to look at how to handle God’s mercy upon our lives.

AND PROMOTE THE RIGHT OF THOSE WHO DESIRE TO DO SO.

If you look at the Church, you will see the same generation rising and occupying places reserved for the consecrated. You will see the likes of people GOD sent fire to devour in the days of old, becoming preachers of the word of the same GOD whose Heaven they will never go when they die.

But God is not willing that any should perish, but that all of us should come to repentance!

Like I have always shared, God’s Mercy is not just a need but a seed. Those who do not understand that will take it for granted and end up being grounded. They will make use of His mercies and turn it into a fertilizer for sin and wickedness.

We must learn how not to use God’s mercy in your lives to fertilize a sinful lifestyle all around, believing God to forgive us. We may get into things that we will never come out of. Many of us do this and destroy ourselves in the process.

We are a generation that loves taking God’s mercies for granted.

You find people who got involved in wicked acts without immediate consequence going back to them repeatedly. You find men and women who have become callous to God’s word and ways, seeing nothing wrong with any of their sinful actions. And because of His mercies upon their lives that protects them from immediate consequence, the remain unrepentant.

Someone once said to an evangelist that, he will commit so many sins and get God so angry that when he dies and appear before Him for judgment, God will be so angry and will want to throw Him into hell. But because of the level of anger He will mistakenly throw him into Heaven without realizing it.

THAT IS HOW DEPRAVED MANY HAVE BECOME.

We need to understand that when God show a man who is living in sin mercy, He expects something in return and that thing is not money or any other offering. What God expects in return is his repentance! We see that all through the scriptures. The most common of the scriptures is the story of the woman caught in Adultery.

Now Moses, in the law, commanded us that such should be stoned. But what do You say?” This they said, testing Him, that they might have something of which to accuse Him. But Jesus stooped down and wrote on the ground with His finger, as though He did not hear.

So when they continued asking Him, He raised Himself up and said to them, “He who is without sin among you, let him throw a stone at her first.”

And again He stooped down and wrote on the ground. Then those who heard it, being convicted by their conscience, went out one by one, beginning with the oldest even to the last. And Jesus was left alone, and the woman standing in the midst.

When Jesus had raised Himself up and saw no one but the woman, He said to her, “Woman, where are those accusers of yours? Has no one condemned you?” She said, “No one, Lord.” And Jesus said to her, “Neither do I condemn you; go and sin no more.” John 8:3-11 NKJV

Often times when this story is told in Church, the preachers major on the part that says “He who is without sin among you, let him throw a stone at her first” because of our lack of willingness to live a righteous life.

We major in the minor because many are living in sin and not ready to be rebuked or corrected. But the most important part of this story so long as the mercy of God is concerned, is the last part. The bible says,

JESUS LOOKED UP AND SAID TO THE WOMAN, “NEITHER DO I CONDEMN YOU GO AND SIN NO MORE.”

The expected end of GOD for this woman is that she “go and sin no more.” This is the aspect many of us ignore when dealing with GOD’s mercy. We ignore that part of His mercy that call on us to stop sinning. We love the part that forgives without demanding for repentance.

Unfortunately for lovers of sin, that part do not exist in the true GOD. It only exists in the imaginations of perverse preachers and their followers. That is why many will be surprised in eternity. Hell is real and Heaven too.

The seed of mercy Jesus sowed that day into that woman was sown with an expected harvest – that harvest is REPENTANCE. If God were not interested in a harvest of repentance, He would not have charged her to go and sin no more. You see grace and truth in action here.

Grace told her “neither do I condemn you.” True Grace does not condemn, it consecrates.

Meaning, it gives us the power to go and sin no more. False grace does not condemn too, but it does not consecrate either. It condones and cover sin, calling it a weakness! That is the slim difference between the two, that is why people miss it.

True Grace has a way of imparting us with the power to do truth. That is why I tell people if you say you are under grace, but live in sin, you are not under grace but under grass.

GOD’S GRACE SAID TO HER “NEITHER DO I CONDEMN YOU.” AND TRUTH ADDED, “GO AND SIN NO MORE.”

Truth will urge sinners to repent, and rebuke them when they repeat their sins. Grace will enable them not to be comfortable in whatever truth has rebuked of.

It is Grace and truth that works together to turn a practicing sinner into an ex sinner.

Hence when you rebuke them for sins they are secretly or openly involved in, they scream at you saying, “you have no right to condemn me, we are all sinners.”

And my response to this kind of a generation has always been this; “we are not all sinners. If we are all sinners, then Christ died in vain and the Holy Ghost is not on earth. Some of us have been blood washed and enabled by grace to obey the word of truth and righteousness.”

This adulterated grace mentality, is the greatest killer of righteous living in the life of most Christians.

Our devotional text today is a unique one.

A major portion of it says

“If You, LORD, should [a]mark iniquities, O Lord, who could stand? But there is forgiveness with You, That You may be feared.”

That captures in one breathe the vision of GOD’s forgiveness and mercies. When God forgives us of our sins, He expects His fear to spring forth in our lives.

I believe the message of today have been passed.

The LORD is merciful and gracious, Slow to anger, and abounding in mercy. He will not always strive with us, Nor will He keep His anger forever.

For as the heavens are high above the earth, So great is His mercy toward those who fear Him;

As far as the east is from the west, So far has He removed our transgressions from us.

As a father pities his children, So the LORD pities those who fear Him. For He [a]knows our frame; He remembers that we are dust. Psalm 103:8-14 NKJV