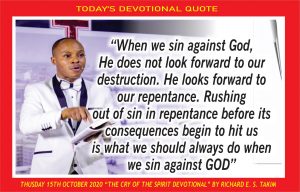 WELCOME TO THE 287th DAY OF OUR YEAR OF REJOICING

God is LOVE. That is what the Bible says! It did not just say God loves; it says God is love. That is why we are still here. Meaning, LOVE is one of His natures. It is not just His characteristic but His Spirit Nature. That is why He is slow to anger.

God is slow to anger, so when we do bad things, He does not just move to destroy us, it is the bad things that we do that destroys us. The Bible says sin is a killer! It kills peace, joy, prosperity and all that makes life exciting if we continue living in it. It brings death and destruction to the life of the sinner. It destroys those who live in it.

It is like the prodigal son who left the Father’s house suffering for it far away in the foreign land he chose to go stay. If He had taken it that GOD was angry with him and that was why He was suffering; if he had thought that all his suffering was a punishment from GOD, he would have died in a foreign.

That is how many of us destroy ourselves.

But the prodigal son knew how loving his Father is, hence choosing to return. If we know how loving our Heavenly Father is, we will return home in repentance whenever we sin. We will not say away from His presence suffering from the consequences of our sins and taking it as a punishment from Him, while He awaits to receive us into His loving hands.

Indeed, GOD is love. Let no one confuse us about that. He does not deal with us according to our sins, but according to His mercy towards us. It is what we will do with His mercies that determines what He does. That is why He look forward to our repentance whenever we sin, not our destruction.

IF YOU LOOK AT OUR DEVOTIONAL TEXT TODAY, YOU WILL SEE HOW GOD CARES FOR EVEN THE MOST VALIANT OFFENDER.

He established Cities of refuge in the days of the Bible to reveal to us how He cares for even the vilest offender.

That means, whenever I offend, I have the blood of Jesus Christ as my City of refuge to run to. But if I stay out in rebellion like Cain, and other Bible characters, a time is going to come when the manslayer, or my sins will catch up with me and destroy me.

You see, God is not willing that anyone should perish but that all of us should come to repentance. I reiterate against that when we sin against Him, He does not look out for our destruction, He looks out for our repentance. He is always tough on sin, but gentle on the sinner. Only the rebellious perishes in their rebellion not the repentant.

The repentant terminates what their sin would have done to them through their repentance. That is why the Bible is full of a call to repentance, not a call to our destruction.

God set Cities of refuge in the days of the Bible as a shadow of not just what the blood of Jesus ought to be, but also a shadow of what Church ministry ought to be.

Sadly, many have abused God’s grace and mercy and turn the Church to where active and terrible sinning out to be. God is presented as an accommodating God; who can even ordain a gay, lesbian or any lost sinner who shouts “praise the LORD” a bishop over His Church.

We are resenting the wrong God to a dying world! That is why hell is enlarging itself, sin is multiplying and our messages are calling no one to repentance but strengthening the hands of sinners in their sins.

But God never intended that his mercies be ABUSED. He expects that it be USED.

He Instructed Moses to set aside 42 Cities for the Levites and “six additional ones allocated to the Levites to serve as Cities of refuge, to fulfill His vision of not destroying the sinner but saving the sinner. The Bible says,

“Now among the cities which you will give to the Levites you shall appoint six cities of refuge, to which a manslayer may flee. And to these you shall add forty-two cities.” Numbers 35:6 NKJV

IN BIBLE DAYS, THESE CITIES OF REFUGE WHERE MEANT FOR PEOPLE WHO HAVE COMMITTED ONE CRIME OR THE OTHER.

God who is full of mercy does not want even the worst Criminal to die for his sins. That is why He persuades men to repent. So the City of refuge was like the City of mercy where people, the Bible calls Manslayers, ran into and were saved from the consequences of their crimes.

No matter what may be running after them as a consequence for their sins, if they run into the city of refuge, they will be saved from it.

No one is permitted to execute punishment on any criminal who runs into the City of refuge. The people in the City of refuge were expected to make use of the mercy shown to them to turn away from their wicked ways. Then return back to their possession after the death of the High Priest who was serving as of the time of their escape to the City.

Now the Old Testament is the will of God concealed. And the New is the will of GOD revealed. What was it that God concealed in this Mosaic instruction? Simple, the revelation of redemptive presence of GOD, and the impact it was supposed to make on the lives of sinful men and women who runs to it . The Bible says,

“The name of the Lord is a strong tower; the righteous run to it and are safe.” Proverbs 18:10 NKJV

What do you think made those Cities of refuge Cities of mercy? It was not the location but the presence of the name of the LORD there.

God literally put His name on those Cities as LOVE, Justice and Mercy, and the name or presence, spoke over the lives of the erring souls just for running into those Cities. The name of the LORD indeed is a strong tower. The righteous run into it and they are saved.

NOW IT’S IMPORTANT TO NOTE THAT THE BIBLE DID NOT SAY “THE WICKED RUN INTO IT AND THEY ARE SAVED.” IT SAYS “THE RIGHTEOUS.”

Meaning, those who commit the crimes that necessitated their escape to the City of Refuge are expected to run into those Cities in repentance.

In Bible days, people who do not run into the Cities in repentance are usually found loitering outside the boundaries or limits of the City, repeating their crimes thereby loosing God’s mercy and exposing themselves to the avenger!

A major Highlight of our devotional text says,

As earlier stated, apart from the blood of Christ, the Church of Jesus Christ was called to be a City of refuge for even the vilest offender. Meaning, when they get there, they are expected to repent and enjoy a time of refreshing from the redemptive presence of GOD.

But if you look at the impact of our Churches today on people who run into them in repentance, you see a lot of things that suggest that what we have are no Cities of refuge today, we just have cities of refuse.

A refuse of all kinds of active sinners, false doctrines, demonic worship, and all kinds of things. Resulting in many suffering the consequences of these things but blaming what the call evil foundations of their father’s houses, generational curses, evil altars, and etc.

We do not know that whatever we may be suffering after joining our so called Churches, is because there is either no redemptive presence of God there or no repentance in our walk and talk with GOD. In many cases, it is both. People are in local Churches that lacks God’s redemptive presence leading Christians lives that seeks forgiveness without repentance.

WHEN THE ENEMY STRIKES BECAUSE OF YOUR SINS, YOU WILL NOT KNOW!

When he strikes because you did not terminate his coming with genuine repentance, you will not know because you are not taught the truth. Rather will be made to drink Oil, always go for deliverance, use Sand, salt, water, or whatever to pray to be free from whatever may be pursuing you.

Some will EVEN be placed on senseless lives of fasting for deliverance, not knowing that fasting in a City of refuse will not bring any change to you. Getting out is what will bring the change!

Getting out of Cities of refuse presented as Church is the key to the deliverance of many. Even making Heaven hangs on the same key!

We can go on and on, but I believe the message of today has been passed!

No matter what it will cost you, locate a City of Refuge and belong there, and the glory of God will begin to work on your life!

“But I will gather the remnant of My flock out of all countries where I have driven them, and bring them back to their folds; and they shall be fruitful and increase. I will set up shepherds over them who will feed them; and they shall fear no more, nor be dismayed, nor shall they be lacking,” says the Lord.

“Behold, the days are coming,” says the Lord, “That I will raise to David a Branch of righteousness; A King shall reign and prosper, and execute judgment and righteousness in the earth.

In His days Judah will be saved, and Israel will dwell safely; Now this is His name by which He will be called: “Therefore, behold, the days are coming,” says the Lord, “that they shall no longer say, ‘As the Lord lives who brought up the children of Israel from the land of Egypt,’

but, ‘As the Lord lives who brought up and led the descendants of the house of Israel from the north country and from all the countries where I had driven them.’ And they shall dwell in their own land.” Jeremiah 23:3-8 NKJV