“For unto us a Child is born, unto us a Son is given; and the government will be upon His shoulder. And His name will be called Wonderful, Counselor, Mighty God, Everlasting Father, Prince of Peace.”

“Of the increase of His government and peace there will be no end, upon the throne of David and over His kingdom, to order it and establish it with judgment and justice from that time forward, even forever. The zeal of the Lord of hosts will perform this.” Isaiah 9:6-7 NKJV 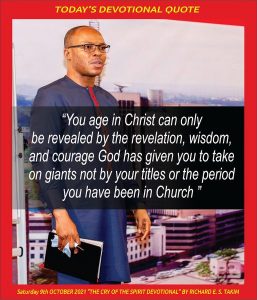 WELCOME TO THE 282ND DAY OF OUR YEAR OF HIGHER HEIGHTS!

Welcome to another glorious day in our season of special schools of the Spirit. This is a unique day because it’s the 8th day of the month. Prophetically speaking, 9 is the number of new beginning, and if you add three more numbers to it, it becomes 12, the number of divine government.

The Church has been in infantile state for too long. God’s clarion call to spiritual maturity has been coming to each generation since the day Paul first penned down the words in the days of the early church. God expects Children to become Sons, Sons to become Fathers, and Fathers generational standards of righteousness. But the reverse seems to be the case in the present day Church.

You find Children of God growing into Sons of hell, those who ought to be Sons of God becoming sons of Baliel, and those who were supposed to be Fathers, becoming catalyst of corruption and all forms of moral decay in the body. All this because of the absence of God’s amazing grace due to the replacement of same with the adulterated grace.

A prophetic gaze into the spiritual lives of many in Church today reveals that so many, from the clergy to the laity, are still babies in the LORD; that is in despite how long they have been in the faith. Most of have grown in Church and become mature in religious practices and politics but are still Babies in the things of the Spirit.

THEY TREAT THEIR EXPERIENCES IN RELIGIOUS PRACTICES AS SPIRITUAL AGE. BUT THE TWO ARE NOT THE SAME.

Age in the spirit is different from age in the flesh or the period you have stayed in a church system. That is why we can say “David was Older than Saul.” Saul had lived longer than David on the Throne when David showed up against the giant, but David lived longer than Saul with the one who placed Saul on the Throne. It takes people who are Older in spirit to confront giants.

Hence David was older and more experienced in spiritual matters than Saul.

If you read the Bible, you will realize that when the Philistine giant appeared, all the spiritual babies then in Israel, including the king, went into hiding. It took one old man called David (Old in friendship with God) to deal with the giant. Your age in Christ will be revealed in your day of adversity or season of war!

It is the revelation, wisdom and courage to take on giants that the LORD has given you that tells us how old or mature you are in Christ. Yes, it is when you giants come that we know how mature you are in the LORD or the faith delivered to the saints. If you cave in in fear or ignorance when giants come, or start going about looking for who to help you deal with them, it is a sign that you are not yet mature.

Sadly, that was what Saul did, giving birth to a Davidic generation.

David spent more time in God’s presence that Saul that was why He was Older than and knew what to do when he met the giant. But Saul knew nothing about being intimate with God. He never even cared bringing the ark back to its place all the forty years he reigned.

Because He was not a man who could stand in the Presence of God, he could not understand that the Philistine giant was defying the armies of the LORD (the invisible army). And because of that, the LORD wanted him death by a small stone not a human weapon of war.

IT TAKES MEN OF THE PRESENCE TO PICK SUCH MYSTERIES AT AN IMMEDIATE PRESENT, ESPECIALLY WHEN FACED WITH GIANTS.

It was David’s spiritual age acquired through countless hours of being with God that made him to know that battles with people who have defied the armies of the LORD are not fought with swords, spears and Javelins. They are fought with the name of the LORD. That was why he picked five stones, representing the five letters in the name “Jesus.”

It’s so sad that we have so many Church leaders TODAY operating with the Saul spirit and many believers under their influence operating with the same spirit that the soldiers of Israel under him operated. Except you break from his or her influence, you can never mature further than your spiritual leader. We have a lot of spiritual leaders and church members who cannot stand against the giants of sin, iniquity and trespass ruing nations.

We have people whose immaturity have robbed of great victories over devils and the issues of life.

We have people who have been in their Churches for many years and have grown through the ranks to become pastors or other officers of their denominations but have not spent even a day in the active presence of God.

I am not referring to a Church service, I mean the active presence of God; the very realm David spent his days in, the mountain of the LORD’s house. It takes spiritual maturity to get so much in Christ. Most of what we look for in the Christian faith is buried in spiritual maturity.

When you grow up in Christ, you will begin to see the manifestation of the significant blessings that you need, the unending miracles or deliverances that are may be needed to be all that God created you to be.

The Bible made it clear that if we are not mature in faith or the things of the Spirit, there are spiritual inheritances we cannot come into.

NO GROWING UP, NO GLORIOUS LIVING. IF YOU WANT TO LIVE GLORIOUSLY, YOU MUST GROW UP AND BECOME STRONG IN CHRIST.

In helping the Church understand the dichotomy between the law and the grace of God in the Book of Galatians, Paul the apostle revealed the role of spiritual maturity in a man’s walk with God. He made it clear that it is the only way we can come into greater things in God. It is the only way we can be free from the status of a slave in the spirit realm. He wrote saying;

“Now I say that the heir, as long as he is a child, does not differ at all from a slave, though he is master of all, but is under guardians and stewards until the time appointed by the father.” Galatians 4:1-2 NKJV

You will never come into things you are master over until you grow up in the things of God.

Things like sicknesses, diseases, demons, the satanic world, sin, suffering, poverty, witches and etc. People who do not spend quality time with God like David will never acquire the age in the spirit to exercise mastery over the works of darkness. They will not come into their private mountains in the LORD’s house where the riches of God’s glory reserved for each one of us, can be accessed.

Our devotional text this morning is full of prophetic and apostolic truths. But we cannot unpack everything.

The text spoke about a child being born, and a Son being given. That was a messianic prophecy fulfilled the day Jesus was born. It was a word God sent to that generation to reveal the true identity of the messiah long before he was born. A major highlight in the text says,

“For unto us a Child is born, unto us a Son is given; and the government will be upon His shoulder.”

Hidden in this statement is the apostolic function of the true Church (I mean the 3rd day church).

The Bible says the government of Jesus will be on us because we are His shoulder. Don’t forget, He is the head of the body. He is the governor among the nations. As our Head, and we His shoulders, we are called to carry out His governmental functions on the face of the earth.

The functions are in two folds or phases. The first phase is the demolition phase, which involves rooting out what He has not planted in the nations, pulling down what He has not built in the lives of men, destroying every evil works, and throwing down anything that exalts itself against the knowledge of GOD.

The second is the reconstruction phase, which involves building lives and getting God’s redemptive will established on earth as written in Heaven. However, just as immaturity prevented Saul and the rest of the soldiers of Israel from carrying out God’s governmental function against the giant then, so it is preventing so many of us in Church today from doing the same.

What is the RHEMA WORD from the lord to us this morning? The word is very simple. “grow up!” That is the word.

Child of God, as a follower of Christ – the Lion of the Tribe of Judah, you are a lion to be feared in hell and respected in Heaven. But spiritual Immaturity can turn you into a goat to be slaughtered by the devil who goes about like a roaring lion looking for who to devour.

You are God’s weapon of war, destined to be used in defeating hell, and promoting Heaven on earth. But lack of spiritual age acquired through countless hours in God’s presence and sound teachings from God’s apostle and prophets, can turn you into a man or woman to be pitied.

Many in need of deliverance today are warriors of righteousness by destiny but lack of spiritual age has kept them in spiritual prisons and satanic dungeons. Time has come to grow up!

Time has come to be fed the word of God into stature in the spirit. Time has come to look for man and woman God can use to help you grow up in the things of God so you can begin to unleash your destiny.

If you make GROWING UP, through proper spiritual feeding by the hands of God’s apostles and prophets and ACQUISITION OF SPIRITUAL AGE, through countless hours with God, your passion, you will gain stature rapidly and become what God created you to be on the face of the earth.

LET THIS SCRIPTURE BE AN ADDITIONAL MEDITATION FOR THE DAY;

“For I consider that the sufferings of this present time are not worthy to be compared with the glory which shall be revealed in us.”

“For the earnest expectation of the creation eagerly waits for the revealing of the sons of God.”

“For the creation was subjected to futility, not willingly, but because of Him who subjected it in hope; because the creation itself also will be delivered from the bondage of corruption into the glorious liberty of the children of God.”

“For we know that the whole creation groans and labors with birth pangs together until now.” Romans 8:18-22 NKJV