“And God has appointed these in the church: first apostles, second prophets, third teachers, after that miracles, then gifts of healings, helps, administrations, varieties of tongues.” 1 Corinthians 12:28 NKJV 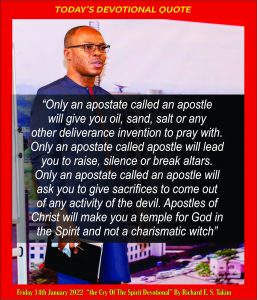 WELCOME TO THE 14TH DAY OF OUR YEAR OF AMAZING GRACE

This is another day the LORD has made, we shall rejoice and be glad in it. He has kept us for 14 days now. Please we should not take it for granted. So long as this year is concerned, each day that we wake up, and whenever we wake up, we should give God thanks.

In our devotion today, God will be refreshing our minds with two words that are common in every apostolic mantle – words I have written about in time past. The words are; “Apostolic” and “Impact”. I guess you are familiar with them. If we add them together, we will have the phrase “Apostolic impact”.

God wants us to have apostolic impact that is why He raised apostles (not be titles but) by content. The Christian faith was shaped and structure through apostolic impact. The early Church made an apostolic impact in the ancient world that was why they were able to blew up the gates of hell and turned things right side up!

It is therefore important that we understand what the phrase means!

First, the word “apostolic” simple means anything that has to do with the early church or the 12 original apostles of the lamb. It also means “that which conforms to the teachings of the early Church, the early apostles or the New Testament.”

There are false apostolic impacts everywhere today, conforming people to this world and not to Christ. But a true apostolic impact will conform us to the teachings of the early Church or the New Testament without divorcing us from the spirit and letters of the Old.

THE IMPRESSION TEACHINGS THAT CONFORMS WITH THAT OF THE EARLY CHURCH WILL HAVE ON US IS WHAT SATAN FEARS MOST.

It will make us too hot for him to handle and bring us to the place of blowing up the gates of hell in the hearts of the lost world and a dying Church. If you want to see good in your life on this side of eternity and the side to come, limit yourself to ministries that make apostolic impact on men and women.

A lot of what is called apostolic in so many churches headed by evangelists by content is demonic! So many people now carry the title of an apostle without the DYING and CONTENT of an apostle.

For your information, there are three types of apostles in scriptures. We have the 12 Original apostles of the lamb found in Acts 12:12-23. Then we have ascension apostles like Paul, and then false apostles (exposed in 2 Corinthians 11).

In fact, he floods the world with false apostles in every generation. His vision is to hinder true apostolic impact from taking place in the lives of men.

Since we are still here, men like Paul who are built by the LORD to build others and bring order to the Church will always be needed in every generation.

EVERY GENERATION WILL NEED MEN WHO CAN PROVOKE APOSTOLIC IMPACT IN THEIR LIVES.

There are Present day ascension apostles of Jesus Christ whose mandate is to blow up the gates of hell and make timely apostolic impacts in the lives of men. Sadly, they are branded names by the ignorant and with the many false apostles today, it has become difficult to either identify them or stick to them after identifying them.

What is apostasy? It is a renunciation or departure from the faith.

So many believers have renounced the faith, not by mouth but by character. Others have departed from the values, the righteous standards and the consecration of the faith due to certain teachings they have imbibed.

Teachings on redemption of first born, raising of altars, silencing of altars, praying with salt, sand and etc. and doing some other anti-apostolic things in the name of deliverance. Sadly, people who led them to these things are called apostles.

ONLY AN APOSTATE CALLED AN APOSTLE WILL COLLECT ANY MONEY FROM YOU AS SACRIFICE TO GET HELP FROM THE LORD!

The Bible says in the later days many will depart from (not deny) the faith; giving heed to seducing spirits. They don’t deny they just depart. Some of those who are weapons in the hand of the devil to make this prophecy manifest in the lives of people are the apostates called apostles.

The ministry of an apostate may not make people DENY the faith. It makes them DEPART from the faith. That means, they will still be calling Jesus their LORD and savior but you will never live His life or follow His ways. They will stick to the ways of witch doctors in deliverance matters and the way of tradition in marriage matters, and still be calling themselves born again.

They will lead worldly lives and still be calling themselves saved and sanctified. They will profess that they know the LORD but by character fruit live the same way like the lost world. They have not denied the faith, they have only departed from it through their presumptuous sins, and that is very dangerous.

Child of God, there is a dangerous departure from the faith that was once delivered to the saints today, giving rise to a false Christianity – a Christianity that is not in conformity with the teachings of the early Church or the New Testament – a Christianity that cannot stand righteous rebukes or prophecies that confront them of their wicked ways.

We forget that a people who cannot stand righteous rebukes will soon find themselves on the broad way that leads to eternal damnation.

Today the dangerous departure (not denial) of the faith has created a Church generation that has become a house for all sort of unclean spirits like the sex goddess! We now believe sex before or outside marriage is okay. Many of us preachers now have side chicks and all that, and feel it’s okay.

The side chickens or chic themselves feel they are doing nothing wrong sleeping with the married men they sleep with. They do what they do and still called themselves Christians or born again. That is a departure from the values of the faith, though not a denial of the faith.

LYING DEMONS NOW PROPHESY USING THE LIPS OF SO MANY PEOPLE WE CALL PROPHETS AND PROPHETESSES.

To many, lies are no longer lies but wisdom. The doctrines of false Christianity have been deeply entrenched in the hearts of many in our days. People no longer tremble at the word of the LORD! If they are rebuked of their sins, they accuse those God may be using to do it of judging them. When they are convicted of sin under a strong apostolic message, they accuse the preacher of condemning them.

I have said it again and again that a generation that calls rebuke “judgment” and conviction “condemnation” will never be unplugged from the grip of hell. That is why we need true apostolic impact back in Church.

Christianity without true apostolic impact will give birth to apostasy or a departure from the faith.

We are seeing people in the Pentecostal and charismatic circles today departing from the teachings of the New Testament. Sound doctrines on Holiness, repentance, revival, a grace balanced with truth, the Holy Spirit, His holy word and etc. are now missing in the hearts of most present-day Churches.

Except for few Assemblies of God’s people, there is no true move of the Spirit any longer. If there is a time, we need a return of apostolic impact, it is today.

True apostolic impact will conform your life to the teachings of the New Testament and give you rest from the days of adversity. It will make you another Christ on the face of the earth!

We need it back by the hands of present-day ascension apostles of Jesus Christ. But I wonder if we will ever get it back? The way the church is presently constituted, except there is a spiritual revolution, there will never be a return of true apostolic impact.

HOWEVER, THE GOOD NEWS IS THAT REVOLUTION HAS BEGUN!

I believe strongly that there is someone reading this that has had many impacts in life but has not had apostolic impact. That is why his or her life is far from being fulfilled.

If apostolic impact is missing in your life, you will be unfruitful in your walk with God, leading to a disorderly Christian life, wrecked by persistent sin and powerlessness in the spirit.

Our devotional text says God placed first apostles in the Church, then other gifts and moves of the Spirit. Why apostles first? The reason is to put apostolic content in those gifts, so that apostolic impact can be released through those gifts and produce a Christianity that is in conformity with the teachings of the New Testament, without divorcing the spirits and letter of the Old Testament.

You can Join us daily on our Television Station, The Morning Cloud Television, or in our Services on Sundays here in Nairobi Kenya for regular apostolic impacts. It will give you rest from the days of adversity and deliver you from the horrors of the last days!

“Then many false prophets will rise up and deceive many. And because lawlessness will abound, the love of many will grow cold. But he who endures to the end shall be saved.” Matt 24:11-14 NKJV