“Now all Judah, with their little ones, their wives, and their children, stood before the LORD.

And he said, “Listen, all you of Judah and you inhabitants of Jerusalem, and you, King Jehoshaphat! Thus says the LORD to you: ‘Do not be afraid nor dismayed because of this great multitude, for the battle is not yours, but God’s.

Tomorrow go down against them. They will surely come up by the Ascent of Ziz, and you will find them at the end of the brook before the Wilderness of Jeruel.

You will not need to fight in this battle. Position yourselves, stand still and see the salvation of the LORD, who is with you, O Judah and Jerusalem!’ Do not fear or be dismayed; tomorrow go out against them, for the LORD is with you.” 2 Chronicles 20:13-17 NKJV 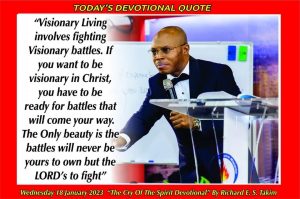 WELCOME TO THE 18TH DAY OF OUR YEAR OF SIGNS AND WONDERS!

God is faithful to us. He has brought us again to another day. We give God thanks for this day. We slept and woke up because He kept us. Like we often state on this platform, one may be able to fall asleep on his own but one cannot wake up. Only God can make one wake up.

We also glorify Him for making forgiveness of sin free. Though, like stated the other day, there are preachers who ask people to give money for all that. We give him the glory and appreciate Him for not commercializing the gospel and its blessings.

We also give Him the glory and appreciate Him never dealing with us according to our sin natures but according to His faithfulness. It is very saddening to have a nature that can be drawn into sin. Almost daily, as we seek to live right, we come to the understanding why Paul the apostle said;

“For we who are in this tent groan, being burdened, not because we want to be unclothed, but further clothed, that mortality may be swallowed up by life.

Now He who has prepared us for this very thing is God, who also has given us the Spirit as a guarantee.” 2 Corinthians 5:4-5 NKJV

Obviously, the limitations of living in a body of sin, and all its consequences must have made our father Paul to write this.

It is not easy to live in a fallen nature. Our only consolation while living in this body is the Holy Spirit who has been given as a guarantee. He is here to help us live successfully in this body of sin and not follow its sinful cravings. His final help will be at the end of our days, if we reach the finishing line in Christ. That is when He will completely strip us of this body and give us a spiritual body that is infallible and immortal.

Some of us look forward to the day that we will be forever free from this nature, in the bye and bye when immortality will swallow us up and we become like the angels in the age to come.

Yesterday, we saw the first law of visionary battles that states “the enemy will not outwit you in battle, or the Sons of wickedness afflict you.” Now, one people under Heaven that we can vividly see this manifesting in their lives is the nation of Israel.

THE REASON IS BECAUSE OF ITS ORIGIN AND PROPHETIC PURPOSE.

Israel is the first, and maybe only nation under Heaven that was born by God using one man with a call from Him. Its birth took place for centuries through a call of God that came to a unique man called Abraham.

Their purpose was to receive the oracles of God for the rest of the nations, bring forth Christ for the redemption of mankind, and carry out other feats for GOD taking possession and living in the area of the earth where the Garden of Eden once existed, and preserving the place for God.

All that plunged them into visionary battles.

In other words, they were commanded by God to fight those battles. Visionary battles also, are battles we fight in line with God’s purpose and calling upon our lives. Moses, the prophetic leader God used to finally bring the nation into being, said to them;

“When the LORD your God brings you into the land which you go to possess, and has cast out many nations before you, the Hittites and the Girgashites and the Amorites and the Canaanites and the Perizzites and the Hivites and the Jebusites, seven nations greater and mightier than you,

and when the LORD your God delivers them over to you, you shall conquer them and utterly destroy them. You shall make no covenant with them nor show mercy to them.” Deuteronomy 7:1-2 NKJV

THE LAW WAS FIRST REVEALED TO HIM WHEN THE LORD SAID TO HIM;

“Every place that the sole of your foot will tread upon I have given you, as I said to Moses.

From the wilderness and this Lebanon as far as the great river, the River Euphrates, all the land of the Hittites, and to the Great Sea toward the going down of the sun, shall be your territory.

No man shall be able to stand before you all the days of your life; as I was with Moses, so I will be with you. I will not leave you nor forsake you.” Joshua 1:3-5 NKJV

You can see this first law of visionary battles (the enemy shall not outwit you in battle, nor the sons of wickedness afflict you) intrinsically embedded in God’s promise to Joshua in this scripture. You experience the same thing each time you fight battles for GOD.

The same God who was with Joshua is still here with us in the person of the Holy Spirit. That is why you find Him igniting Joshua 1:3-5 in our spirits each time He sends us to fight battles for the LORD. The scripture resounds the first law of visionary battle. The essence is to stir us to move in faith into the war-front, knowing that there is already a law protecting us.

It is my prayer that we will get our heart established on these laws before going out to fight any battle the LORD may have assigned to us. Never forget, you will only fail if you are doing what the LORD has not commanded you. So long as it is what He commanded, you will be protected by His law.

Visionary living involves fighting visionary battles; do not forget that, and do not mix it up. If you want to be visionary, you have to be ready for battles that will come your way. There are laws that have been stipulated by the LORD to help us come out well.

GO INTO BATTLE WITH A FULL KNOWLEDGE OF THEM AND TRUST GOD TO IMPLEMENT THEM AS YOU FIGHT.

Our devotional text today is about the second law of visionary battles. You can see it vividly stated in the scripture. The text is about another battle Israel fought, not to possess the land the LORD had given them, but to keep it in possession. The text says;
“Now all Judah, with their little ones, their wives, and their children, stood before the LORD.

And he said, “Listen, all you of Judah and you inhabitants of Jerusalem, and you, King Jehoshaphat! Thus says the LORD to you: ‘Do not be afraid nor dismayed because of this great multitude, for the battle is not yours, but God’s.

Tomorrow go down against them. They will surely come up by the Ascent of Ziz, and you will find them at the end of the brook before the Wilderness of Jeruel.

You will not need to fight in this battle. Position yourselves, stand still and see the salvation of the LORD, who is with you, O Judah and Jerusalem!’ Do not fear or be dismayed; tomorrow go out against them, for the LORD is with you.” 2 Chronicles 20:13-17 NKJV

This second law of visionary battles, as we can see in this passage of the scripture states that “You will not need to fight in this battle. Position yourselves, stand still and see the salvation of the LORD.”

This is a major law of the LORD that Heaven implements when we are fighting the battles of the LORD in our bid to establish His will. It is a law that forbids us from owning the battles. It is another law that makes our defeat in battle impossible and our victory sure.

You see, it will be unjust for God to appoint us visions to live for, and when battles for being visionary erupt, then He abandons us. Man may work that way but not GOD. When we are living His kind of life, pursuing His vision and battles erupt as a result, He will move to own the battles and grant us victory over the enemy. He will say to us “the battle is mine, step aside.”

THE TRUTH IS, IF THE VISION IS GOD’S THE BATTLES THAT MAY ERUPT AS A RESULT OF PURSUING IT WILL ALSO BE GOD’S.

It will never be yours.

It is when the vision is yours that the battle that may erupt will be yours; and trust me, you will never come out well from any battle that is yours. The devil will wrap you up in a blanket of defeat and hide you in a hole without anyone from Heaven to help you. It is only when the battle is the LORD’s that we come out victorious. And the battle can only be the LORD’s if the vision or the kind of life you are living is from the LORD.

If the battle is the LORD’s, you will not even shoot an arrow, but you will get the victory. You will only sing and watch God sink the enemy. This law of visionary battles, just like the previous one, is a major law that makes visionary living sweet and exciting despite challenges.

It is my prayer that God will use the few thoughts we have shared to keep giving you victory in every battle you may face in life. Amen and amen!

“Now when they began to sing and to praise, the LORD set ambushes against the people of Ammon, Moab, and Mount Seir, who had come against Judah; and they were defeated.

So when Judah came to a place overlooking the wilderness, they looked toward the multitude; and there were their dead bodies, fallen on the earth. No one had escaped.” 2 Chronicles 20:22-24 NKJV