“And another sign appeared in heaven: behold, a great, fiery red dragon having seven heads and ten horns, and seven diadems on his heads.

His tail drew a third of the stars of heaven and threw them to the earth. And the dragon stood before the woman who was ready to give birth, to devour her Child as soon as it was born.

She bore a male Child who was to rule all nations with a rod of iron. And her Child was caught up to God and His throne.” Revelation 12:3-5 NKJV 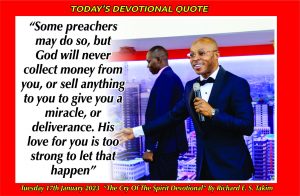 WELCOME TO THE 17TH DAY OF OUR YEAR OF SIGNS AND WONDERS!

Thank God for another day. Yes, thank God for not giving God any money to be able to sleep and wake up. That is a sign that He still loves you.

A preacher or prophet may use some scriptures in the Bible to collect money from your hands for you to get a miracle from God, but God will never collect money from your hands to give you anything. All He does to us is freely. You see that in all the miracles Jesus did for people when He was physically here, and all the miracles the apostles unlocked for people in the days of the early church.

It is too strong for Him to collect money from you to forgive your sins. It is too strong for you to pay for anything He owns. That is why none of us have ever given him money to be able to sleep and wake up. The Bible says “For so He gives His beloved sleep.” (Psalm 127:2)

The Bible spoke about the rise of false teachers in our days. Sadly, they are so many, even with miracles to back them up.

Today, due to the many lies and half-truths that have been peddled by these preachers, like we said, with even miracles to back them up, a lot of believers will need thousands of seminars to come to the understanding that they do not need to give God anything to get anything from Him. They will need countless seminars of life transforming truths to vomit all they have believed.

TO CHANGE YOUR LIFE, YOU MUST CHANGE WHAT YOU HAVE BEEN HEARING, WHICH SHOULD LEAD TO CHANGING YOUR BELIEF SYSTEM.

You must come into the realm of sanctified and progressive truths from God. You must cut off from all false teachers and their half-truths. God gives all things freely, they all come to us by faith. That is why yesterday’s devotional and the one before yesterday are very vital.

The Bible says the Just shall live by faith. We looked at the laws of faith, and how it helps us to lead visionary lives.

Go back to those devotionals and absorb them again for you to understand how to get things freely from God by faith. Understand the part that defined faith as a title deed, and revisit how Hannah got her barrenness terminated without sowing a seed, buying or anointing herself with oil, or using water or salt to pray despite being in the Old Testament.

It is people who do not operate the laws of faith that go giving money to preachers and buying spiritual gadgets from them to get deliverance or miracles. Those who operate the laws get great things from God freely. Then serve Him with their substance as dedicated kingdom stewards.

Incase today is the day you joined us on this, we have been on a 31-day journey of truth with the Cry of the Spirit on visionary living. Today is the 17th day. We have seen few laws of visionary living; the law of faith was the last we saw. These laws if embraced, will change our lives radically. The Bible calls them the laws of the LORD. It says they are perfect and can do anything in our lives.

Like we shared in one of those devotionals, these laws are stronger than prayer because if you are prayerful but do not obey them, your prayers will remain unanswered. It is prayerful people who walk in the laws or the principles of the LORD that governs different blessings in His kingdom that get results when they pray.

Paul called his own visionary battles “fight with the beast of Ephesus.” He said he fought with the beast of Ephesus. Those were beastly men and women who were instigated by hell to withstand his decision to live for God and be a God given visionary man in his generation. At one time he had to deal with Elymas the sorcerer who tried to turn another man from the ways of God.

Paul’s visionary battles, happened because of his divine mandate, mantle and ranking. He was mandated to deal with falsehood and neutralize false apostles and all that with the mantle of an apostle of Jesus Christ.

There are many others who fought visionary battles in the early church, but let’s take a look at the Old Testament. One person we can also see who fought visionary battles in the Old Testament was Jeremiah. His mandate was almost similar with that of Paul, but his was heavy on false prophets, Baals and all the paganism that the people of his day adopted.

At one time Jeremiah got so wearied and GOD said to him;

“If you have run with the footmen, and they have wearied you, then how can you contend with horses? And if in the land of peace, In which you trusted, they wearied you, Then how will you do in the floodplain of the Jordan?

For even your brothers, the house of your father, Even they have dealt treacherously with you; Yes, they have called a multitude after you. Do not believe them, Even though they speak smooth words to you.” Jeremiah 12:5-6 NKJV

If God commissions you to fight against paganism in any generation, get ready for the worst of hell. If your God given vision is truly God given, it will create sparks in the spirit realm and ripples in the camp of the enemy. You will fight a lot of visionary battles.

NOW, WHAT ARE VISIONARY BATTLES?

Visionary battles are battles we fight to bring our God given visions to pass in a wicked world. They are conflicts, that the enemy creates, instigates against us, or throws on our paths to hinder our decision to spend our days walking in the Spirit, and looking into the face of He who is invisible, and doing His blessed will.

Visionary battles are battles we fight for deciding to lead visionary lives that are guided and governed by the LORD. If you think you will have it easy with people, policies, places, and human systems when you decide to lead a God ordained visionary life, then you do not know what you are in for.

Visions from God will be resisted by men and women who are not sold out to God. People in Christ who decide to lead visionary lives from God, will be fought and resisted by hell. Do not be mistaken about it. That was why as soon as God called Abraham, He said to him “I will bless those that bless you, and curse those that curse you.” God did that because he knew what hell will attempt to do to Abraham and his descendants.

Child of God, Satan hates people who lead God given visionary lives. He knows that every God given visionary life is playing a major role to fulfill the prophecy of the prophetic male child in the book of Revelation 12 who is destined to smash his works on earth and rule all nations with the rod of Iron. Our devotional text says;

“And another sign appeared in heaven: behold, a great, fiery red dragon having seven heads and ten horns, and seven diadems on his heads.

His tail drew a third of the stars of heaven and threw them to the earth. And the dragon stood before the woman who was ready to give birth, to devour her Child as soon as it was born.

She bore a male Child who was to rule all nations with a rod of iron. And her Child was caught up to God and His throne.” Revelation 12:3-5 NKJV

IF YOU ARE VISIONARY IN GOD, YOU FIT INTO THE PROPHETIC MALE CHILD IN THIS SCRIPTURE.

Every visionary person in God fulfills their own portion of what the word says about that child. Their visionary living smashes the gods of the nations and works towards bringing the nations under the rulership of Christ, the Male child in this prophecy.

Because of that, they will be fought. Satan will mobilize his host to come against them as a dragon.

A template of the warfare we see in Revelation 12; the warfare around the Prophetic child, will be extended to them. But the intervention we also see there, where the Child was caught up to God and His throne, will also be witnessed by them. Hallelujah!

The enemy will not be able to outwit such people in the battle he prepares or wages against them. They will be caught up to God and to His throne and live their earthly lives from there, far above principalities and powers, while living for the LORD and doing His blessed will. Which brings us to the first law of visionary battles.

The law states that “the enemy will not outwit you in battle, or the Sons of wickedness afflict you.”

Unfortunately, that is all we can take for today. When we return tomorrow, we will be looking at more truths on this beautiful kingdom subject. Until then, let what we have shared ignite our faith for victorious visionary living in Jesus precious name, Amen!

“And what more shall I say? For the time would fail me to tell of Gideon and Barak and Samson and Jephthah, also of David and Samuel and the prophets: who through faith subdued kingdoms, worked righteousness, obtained promises, stopped the mouths of lions,

quenched the violence of fire, escaped the edge of the sword, out of weakness were made strong, became valiant in battle, turned to flight the armies of the aliens.

Women received their dead raised to life again. Others were tortured, not accepting deliverance, that they might obtain a better resurrection. Still others had trial of mockings and scourgings, yes, and of chains and imprisonment.

They were stoned, they were sawn in two, were tempted, were slain with the sword. They wandered about in sheepskins and goatskins, being destitute, afflicted, tormented—

of whom the world was not worthy. They wandered in deserts and mountains, in dens and caves of the earth.” Hebrews 11:32-38 NKJ