“O Lord, how manifold are Your works! In wisdom you have made them all. The earth is full of your possessions —
These all wait for you, that you may give them their food in due season. What you give them they gather in; you open your hand; they are filled with good.” Psalms 104:24, 27, 28 NKJV 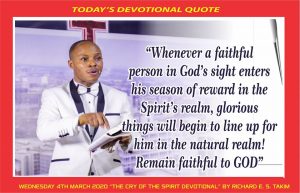 WELCOME TO THE 64th DAY OF OUR YEAR OF REJOICING

Today we will be looking at the mysteries of divine seasons.

Our Church generation is yet to come to the full revelation of divine seasons. That is why we struggle and let life go in a circle. God does things under Heaven in times and seasons. It is deadly spiritually to be prophetically deaf to a supernaturally determined season of GOD for your life.

The difference between the glorious you and the gory you lie in your ability to recognize and seize a supernaturally determined season of God for your life. Life on earth is in seasons!

Breakthrough is a season thing. Lasting blessings comes in their seasons. If we do not come to terms with this truth we will keep struggling, fighting, competing with ourselves, and taking decisions that will result in more and more struggles.

Those who understand God’s will for their lives and His determined success season for them do not compete with anyone. They live according to divine will, comparing themselves with only the will of God for their lives.

Most of our worries and troubles in life are consequences of not understanding these simple but profound truths. Seasons are what determines success in life. Times have been given the power to determine certain life triumphs.

For instance, when the time comes for a wicked man to die, nothing can stop time from taking his life. When the season comes for faithfulness to be rewarded by Heaven, no force on earth, in Heaven, or beyond the earth can stop that from happening.

“These all wait for you, that you may give them their food in due season. What you give them they gather in; you open your hand, they are filled with good.”

Whenever a faithful man or woman enters his or her season of reward in the Spirit, things will start lining up for them in the natural. They will begin to gather whatever God has given them that they could not access before.

THEY WILL BEGIN TO SEE UNCOMMON FAVORS THAT THEY MAY NOT HAVE SEEN BEFORE.

Yes, they will see their season forcing God to open His arm towards them, and giving them things, their eyes have not seen, their ears heard, or hearts conceived. They will find the season pulling men and substance to them from unexpected ends. It will blind people to their shortcomings and make men celebrate even their inadequacy as strength. It is called the grace of a divine season.

Divinely determined seasons are very powerful. They are more powerful than all your enemies put together. Oh yes! We must understand the mystery!

For instance, it was the season for Goliaths demise that gave David victory over him. David sensed that it was time for the giant to go down that was why he went after him. When you attack your enemies in their divinely determined season of defeat, they will fall like dead men even before you talk to God about them.

To have things at our command also requires doing them within the season GOD set them to be done. The Bible says:

Of the sons of Issachar who had understanding of the times, to know what Israel ought to do, their chiefs were two hundred; and all their brethren were at their command; 1 Chronicles 12:32 NKJV

If you want things to be at your command, understand the divinely determined times and season for doing them before you move to do them. God’s kingdom citizens fail for not knowing or understanding this secret.

David was one Bible Character that fought terrible wars without a scar. He fought humans who moved like demons. He killed a giant. He took over the stronghold of Zion from the Jebusites. He was always found in the forefront of the hottest battles yet there was no one record of defeat.

What was the secret? He understood his times and season. He knew when to move against the enemy. At one time God told him, “Wait until you hear movements on top of the mulberry trees. That will be a sign to you that God has gone ahead of you.”

Any enemy you move against when God has not moved against him will destroy you. You will be fighting the force outside its divinely determined season of defeat. Consequently, you will lack the supernatural supply from God to come out victorious. Spiritual warfare is going to pick the spoils of war after God has finished the battle.

It is people who do not understand this concept that go head long against the enemy and returns with injuries to show and sometimes to foolishly boast about.

Jesus said we shall tread upon serpent and scorpions and upon all the works of the enemy and nothing shall by any means hurt us. If they are hurting us, it is not God’s will. Boasting about what you suffered for going on a spiritual warfare trip is therefore an act of foolishness.

Understanding your divinely determined times and season is key to dealing with the enemy and unlocking lasting miracles, and covenant blessings.

I pray that you make these devotional your watch word.

AND LET THIS SCRIPTURE BE AN ADDITIONAL MEDITATION.