And the Lord God said, “It is not good that man should be alone; I will make him a helper comparable to him.” Genesis 2:18 NKJV 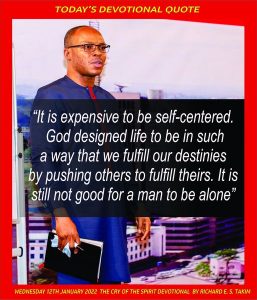 WELCOME TO THE 12TH DAY OF OUR YEAR OF AMAZING GRACE

This is the day the LORD has made, we shall rejoice and be glad in it. He has kept us for 12 days, we believe He will keep us for the rest of the days.

He has never left us alone, because it is not good for a man to be alone, especially alone by himself without God by His side. That was why Moses asked for His presence. We need His presence and all He offers this year.

As I have always said, Faith and Obedience are the currencies of the Spirit. But relationship is the currency of the earth. It is the bridge upon which all things flow. Isolation can be very deadly. Being without a good relationship can be destructive.

You may not have money but if you have people, especially men and women who love and care for you, you are rich. There are people with so much money who ended in suicide because they had no good relationships in their lives. They lived an isolated life.

After having a good pastor over your life as a child of God, the next most important thing to ask the LORD to give you this year is people – people He has designed that you meet for, maybe an aspect of your destiny, to be unlocked.

For instance, a preacher cannot unlock his destiny if there are no God given people in His life to listen to his message and support what he may be called to be.

NO MESSENGER OF GOD CAN FULFILL HIS DESTINY IN ISOLATION.

There are things in life that needs people to be; things that without people, cannot be done. Yes, there are destinies that can not be fulfilled without having God given people around, especially for a long time.

No man or woman can fulfill a marital destiny that requires having a family in isolation. You will need to grow up in a good environment and meet people to find your spouse.

Most people GOD destined to get married are single today because of were they grew up. Some grew up in isolation; having just few people who they did not know are not even marriable, in their lives. To make matters worse, none was there to teach them what to do.

In their ignorance, they jumped into the lives of the people around and attempted building a family with them only to end up remaining alone again in life, some even after bearing children. No ideal marital destiny can be fulfilled in isolation, especially if you are destined to have a family.

Except the LORD perform a miracle, no marital destiny can be fulfilled if a man or woman is among people who are not fit for marriage.

If God design that you have a great family, growing up among people who are not fit for marriage can destroy that plan. One miracle that must happen will be the miracle of GOD making or molding your Adam or Eve afar off, and bringing him or her to you.

No matter the kind of destiny you are called to fulfill, you must not despise people. You must value people to be able to fulfill it. The Bible says God despises no one. We must also learn not to despise people.

I once had people who were terribly jealous of what the LORD gave me but appeared very helpful. I was with them for ten years and did not progress even an inch those ten years. I was busy but not making progress.

JEALOUS PEOPLE WILL CAUSE YOUR LIFE TO BE STAGNANT.

You do not need Jealous people around, you need those who will push you into your destiny as you push them too.

Yes, as you push them too. Life is designed in such a way that we will never fulfill our destinies if we are not busy pushing others to fulfill theirs. I believe self-centered people are ignorant of this.

If you want to succeed this year, find someone whose success will be your success and make them successful. Yes, pray GOD to plant you among people whose destinies are connected to yours; people whose release of destiny will lead to the release of yours; find them and push them to release their destinies.

There is an Elijah you must find and help to push into destiny for you to become who God has created you to be. It is in helping others fulfill their destinies that ours is fulfilled. It is still not good to be alone.

If you are a leader, then you must get it the other way around. You will never fulfill your destiny except you spend your days pushing those God has placed under you to fulfill theirs.

Then the LORD said to him: “Go, return on your way to the Wilderness of Damascus; and when you arrive, anoint Hazael as king over Syria.

Yet I have reserved seven thousand in Israel, all whose knees have not bowed to Baal, and every mouth that has not kissed him.” 1 Kings 19:15-18 NKJV

You see the principle here: Elijah would not have fulfilled his destiny as Baal eliminator if he had not found those guys to train or push into destiny.

If you have a destiny in Christ to fulfill come to us and we will push you to fulfill it. It’s our responsibility to help you do so. But as you come, prepare to also help us fulfil ours. Our destiny is to help you fulfill your destiny.

So, if you help us fulfill our destiny, you are fulfilling yours also since it is in the fulfilment of our destiny that yours is fulfilled. That is how things work in God’s kingdom.

Don’t’ stay around leaders whose destiny is not tied to yours. It will ruin you after serving or helping them to fulfill theirs.

If you are a leader, do not allow people whose destinies are not tied to yours to hang around you. You will end up wasting your time by pushing them to fulfill their destinies without yours being fulfilled in the process.

Do not forget, Paul labored for him, as well as he did for Timothy and Titus. Timothy and Titus ended up helping him fulfill his destiny as he pushed them to fulfill theirs, but Alexander the copper smith ended up ruing his ministry.

It was not just the copper smith but Demas and many others; they were people he labored to help push into their destinies but it ended up very badly. Some forsook him when he needed them most. He wrote to Timothy saying;

“Be diligent to come to me quickly; for Demas has forsaken me, having loved this present world, and has departed for Thessalonica—Crescens for Galatia, Titus for Dalmatia. Only Luke is with me. Get Mark and bring him with you, for he is useful to me for ministry.

And Tychicus I have sent to Ephesus. Bring the cloak that I left with Carpus at Troas when you come—and the books, especially the parchments.

Alexander the coppersmith did me much harm. May the Lord repay him according to his works. You also must beware of him, for he has greatly resisted our words.

At my first defense no one stood with me, but all forsook me. May it not be charged against them.” 2 Timothy 4:9-16 NKJV

I believe the message of today have been passed. Your destiny is connected to someone whose destiny you must push to be fulfilled. In the fulfillment of their destiny is yours fulfilled. But do not let anyone manipulate you to become part of their lives. Let God Himself work it out in His own way.

Our devotional text says; “It is not good that man should be alone; I will make him a helper comparable to him.” Then God went to work to mold someone whose destiny will be connected to Adam; Eve, and brought her to him. The same principle applies. God is the one to bring the person not your scheming and manipulations.

Yes, it is part of divine wisdom not be alone. But it is foolishness to engage the arm of flesh to end your isolation. Allow GOD to set you in the family whose destiny is connected to yours. Allow Him to give you who you must push into destiny so that yours also will be fulfilled. He alone knows who that person is!

MAY THE SCRIPTURE BE AN ADDITIONAL MEDITATION FOR YOU TODAY!

“A father of the fatherless, a defender of widows, is God in His holy habitation. God sets the solitary in families; He brings out those who are bound into prosperity; But the rebellious dwell in a dry land.” Psalms 68:5-6 NKJV